My last mothing help for a While.

It has been fun looking at the moths that I've caught in the last few days, with Jack and Josh. As I said a while ago, at eight years old Jack is already competent at identifying quite a few of the commoner moths, and has the patience and skill to use the field guides to find most of those that he doesn't know. 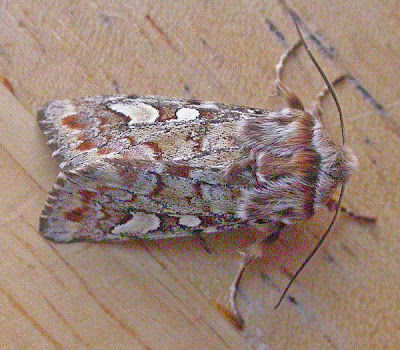 Pine Beauty (Panolis flammea)
A Pine Beauty this morning was a good find among the more usual suspects. They are attractive little moths that often hold their wings tight to their bodies, giving them a slim look. It is a common moth found where ever there are pine trees. 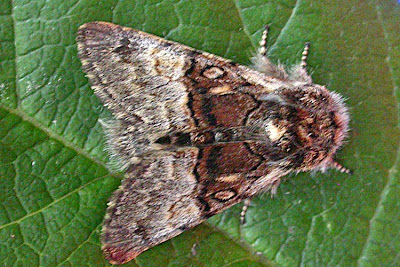 Nut-tree Tussock (Colocasia coryli)
Another first for the year was this Nut-tree Tussock. It is a furry little moth, varying in shade from blackish to a uniform grey, this one is typical of those I catch here. The caterpillars do feed on Hazel, but also Beech, Birch and other trees. 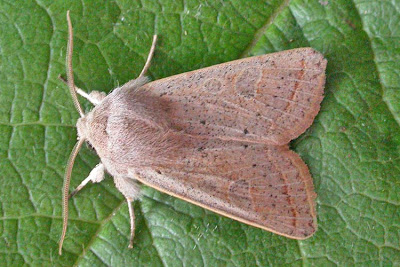 Powdered Quaker (Orthosia gracilis)
I thought that is was a rather well marked, fresh, Powdered Quaker. It stood out among the twenty or so Common Quakers in the same trap. As well as the general dusting of black dots the curved lines of dots near the end of the wings are characteristic.
The boys have returned home after their holiday down here so I'll have to do the traps unaided in the morning. At the moment the thunder is rolling around so they might be a bit soggy.
Posted by Tony Morris at 22:29