Murder in the Conservatory

It is always a delight to find a Green Silver-lines in the moth trap. Each year the first one still amazes at the brightness of the apple green wings. 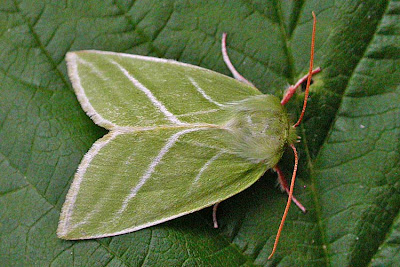 Green Silver-lines (Pseudoips prasinana)
While I was photographing it I noticed a miniature drama taking place on the conservatory wall next to me. 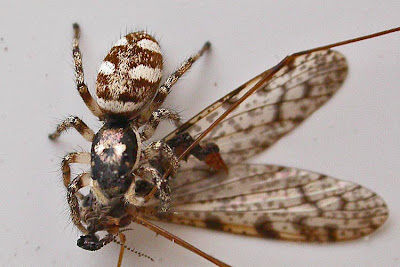 I had earlier been watching a Spotted Crane-fly, an thinking that I should try to get it a suitable set up for a photograph. There it was, but not how I had envisaged it. It was providing a meal for a very small predator, the Zebra Spider. 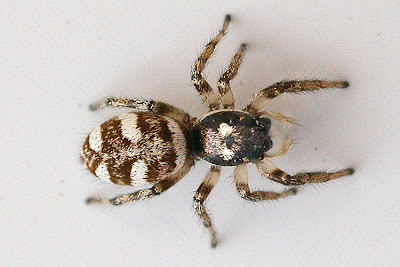 It is one of the commonest spiders and it can often be found around the house or on wall . It is a small spider with a body size of about 8 millimetres.It belongs to the family of jumping spiders.They do not make webs but catch their prey by stalking. When it sees a potential victim it slowly approaches it. Once it is within reach it jumps on to its prey and paralyses it with its venomous 'jaws'. These spiders have fantastic eyes to enable them to make their captures. The large pair at the front are the most impressive and work as telephoto lenses. The retina inside the eye can move in 3 dimensions enabling the spider to look in all directions and focus on a subject. It has another six eyes, positioned around its head so that it has 360 deg vision.
Posted by Tony Morris at 22:37