After putting up the picture of the Powerful Owl in Sydney, I received an e-mail from Murray Lord, the friend who showed us the owl. Below is a picture of the finder of the nesting owl who lives locally and has for several years studied the various species of owls in the small reserve near his house. British wildlife photographer, Eric Hosking, lost an eye when attacked by a Tawny Owl, when he was photographing its nest, hence the title of his biography, "an eye for a bird". 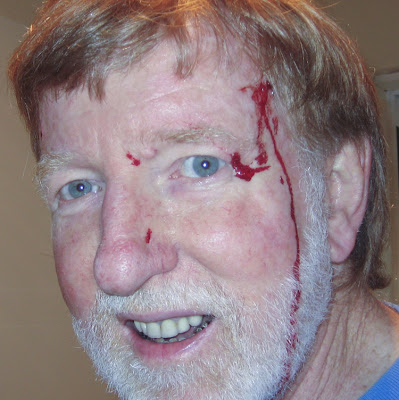 Chris wrote of this episode:
"This year we have a new P(owerful) O(wl) pair who I think are raising their first brood. They do not have the relaxed predictable manner of the old pair, choose strange, separated roosts & get harassed by the currawongs as a result. They seem to be learning & gradually moving down into the heavier shade of the creek rainforest species & roosting as a family.
I found the female & 1 juvenile this morning about 6 metres up & made a note to come back with tripod later in the day when the light was better. As I turned to move on I was suddenly hit by the male who I hadn't seen earlier & he then flew to a low close branch. He had his head pushed forward in their hawk-like look & a wild eye but before I could recover to get a pic the currawongs & kookaburras went for him & he moved away.
On looking in the mirror later I realised how close I came to losing an eye."
Posted by Tony Morris at 21:50