I started off this afternoon with the intention of having a quiet look at the Restharrow Scrape, in the hope of some close birds to photograph. I got to about 10 yards from the hide and returned to the car. It sounded like a discussion club was in full swing in the hide and the likelihood of any birds being at that end of the scrape was pretty low. It turned out that this was a piece of luck. 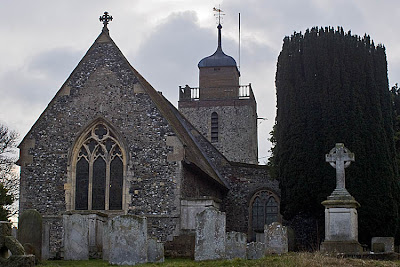 As the sun was now shining I cut back inland in the hope of seeing something interesting in the air, but on my way round the striking church of St Mary the Blessed Virgin at Woodnesborough caught my eye. This Norman church dates back to 1180 and there was a previous Saxon church here and possible other places of worship. The name Woodnesborough is derived from the Anglo-Saxon God Woden. My luck was in, and as I parked I was given a friendly greeting by one of the church wardens, who told me a little of the history of the church and showed me the remains of a pillar that probably formed par of a previous building. 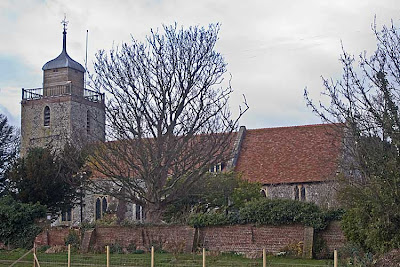 We discussed the wooden "box" on top of the tower and as I suspected this was fairly new and hid an interesting past. Previously there had been a tall steeple, that was maintained by Trinity House as a navigation landmark for sailors. When the river Sour became silted and was no longer used the steeple fell in to disrepair and was removed. My guide was kind enough to get me into the church. No mean feat as it was being given it's weekly clean by dedicated volunteers who didn't want my muddy feet in there. I was far luckier than James Antony Syms who found the church locked when he visited it. 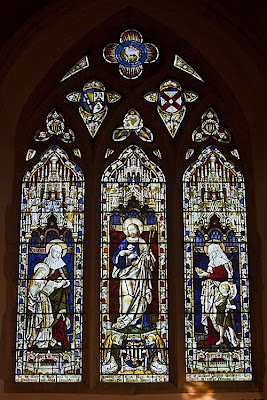 The Church has a number of notable stained glass windows, so the visit inside was imperative. This Victorian window is above the alter and was placed there in 1896. It depicts the Good Shepherd, St Anne and St Elizabeth. 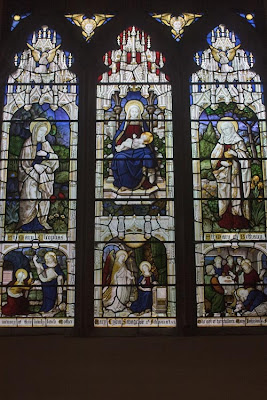 On the south side of the Chancel is the Mary Window, it shows three Marys- St Mary Cleophas, the Virgin Mary and St Mary of Bethany. The window is dated 1912 and is dedicated to Mary Savage. 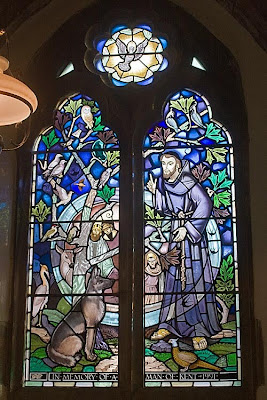 This window was made by Frederick Cole, the Stained Glass Designer of Canterbury Cathedral. It is in memory of a Man of Kent (Tom Miller) and shows St Francis of Assisi with many animals and birds. One of the gems in this church is the Sedilia (a stone seat for clergymen) that dates back to about 1350. It is very elaborate and in this is unusual for a parish church. I has been described as a priceless example of 13th century carving. 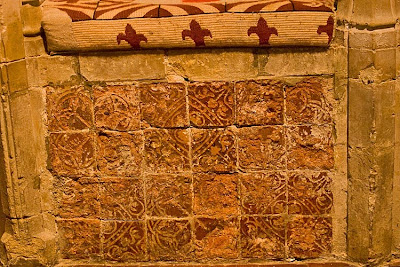 Around the base are some tiles, that were originally found under the altar. This also date back to around the same time. 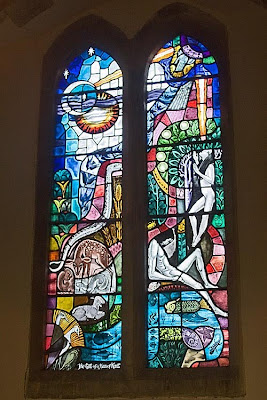 Another window by Frederick Cole is found in the Children's Corner, depicting the creation, as described in the book of Genesis. This window was completed in 1977.
There are many other fascinating things to see in this church, including some graffiti carved into the stone columns, by pilgrims on their way to Canterbury. I would recommend this piece of history to anyone with an interest, there is a little guide book is available, if you don't manage a personal guide as I was lucky enough to do!
After I left I scanned the area from a high point a couple of mile away and was rewarded with a group of four raptors in the air together, two Common Buzzards and two Red Kites. Another Buzzard was nearby. Unfortunately they were all to far for photographs, by luckily I had my telescope in the car and got some really good views.
Posted by Tony Morris at 22:57

Glad you're sharing with us another of your photographic tours around interesting buildings Tony. I've missed them.