I've noticed, while I've been doing my BTO survey tetrads how patchy the distribution of House Sparrows is in some villages. There seem to be quite large areas where they aren't present and then all of a sudden the familiar noise of a group of Sparrows fills the air. 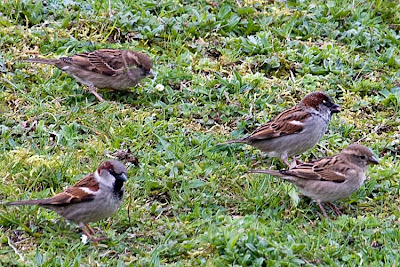 While I was in West Langdon, getting my fresh eggs from Forstal Farm I noticed a group of House Sparrows in the field next to Church Lane. They seemed to be feeding on the grass in quite large groups, commuting from the nearby hedge. I couldn't really see what they were eating and thought that they might be collecting nesting material, but again I saw no evidence of this. I was pleased to see them there in good numbers. What would be even better would be to see a resurgence in Tree Sparrow numbers. They were reasonably common when I started birding, but there are few places in Kent where they can be seen breeding nowadays. We still get then at St Margaret's coming through on migration, but the habitat is obviously not to their liking as they don't hang around for long. 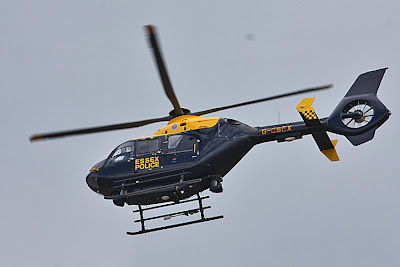 I watched this helicopter low over the cliffs this afternoon, as it is an Essex Police helicopter I don't know if it was on official business or not, I haven't heard of any cliff rescues today.

I've move the camera that records the Badgers coming to feed. I carefully lined t up so that when they were feeding I would get good front on views. Only trouble was the Badger hadn't been thinking on the same lines and came from the other direction, so I only got half a Badger and then the back end. It did move round a bit, but I think I will need to rearrange the positions a bit.
Posted by Tony Morris at 23:25