The cloudy skies around St Margaret's persuaded me to move inland a few miles to find the summer day that was being promised on the weather forecast. At Stodmarsh I found it. It was by far the warmest day of the year. There were a few Hobbies to be seen over the marsh and a Cuckoo was calling from near the car park, but annoying never within range for a photograph. The woodland was alive with the sound of warblers, with several Garden Warblers, singing in a small area, competing with each other and a couple of Blackcaps. In addition a Chiffchaff was monotonously repeating its name. There seemed to be a good number of Cetti's Warblers, so hopefully the cold weather hasn't had too much of an effect on the population. 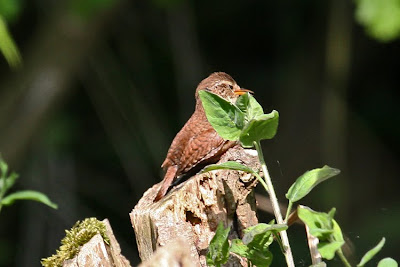 Along the path I had brief views of a Dragonfly flying among the trees. A nearby bench, was conveniently placed. While I sat and soaked in the sun, I watched a Wren doing much the same thing. It sat on a tree stump and appeared to almost lie down while it spread it's feathers out. Something must have disturbed it an it dived off into the undergrowth. 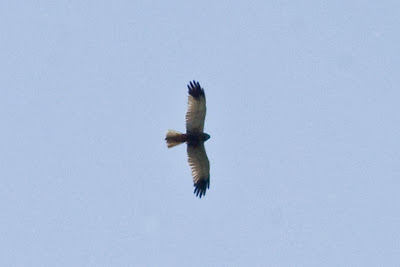 A wet retriever, gave me a quick shower, and alerted me to the arrival of the Saganauts, on a trip out from their rest home. While we discussed the state of the world, a male Marsh Harrier circled high over our heads. The dragonfly, a medium sized Hawker, returned and Terry Laws ( a trainee Saganaut) pointed it out to me perched not far away. 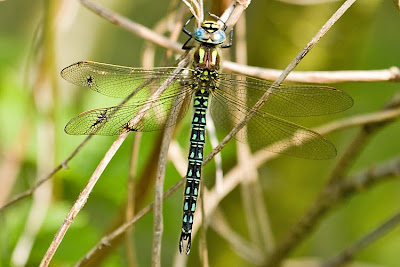 The only Hawker flying at this time of year is The Hairy Dragonfly, or Hairy Hawker, Brachytron pratense. They are on the wing as early as mid April, but more normally May, and can be seen until the middle of July. It is the UK's smallest Hawker, and is widespread, but uncommon throughout England, Wales and Ireland, but it is rare in Scotland. In Kent it is most common in the area of the north Kent marshes, and along the principle rivers. 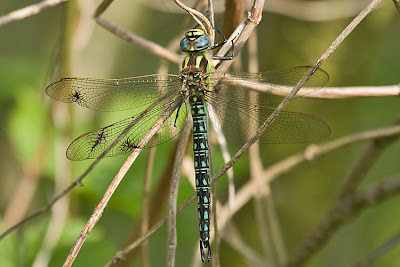 Although the wings on the left side it wasn't until I looked closely at the photos that I could see that both wings had a strange deformity. I almost looked as if someone had stitched up a hole in each wing. I suppose that some damage had occurred as it emerged or while the wings were still wet. It has a distinctly hairy thorax that can be seen on the photos. 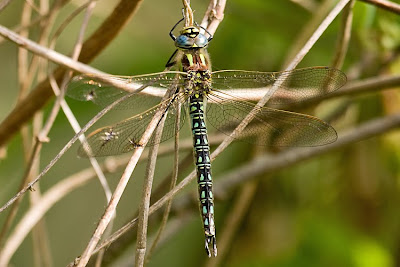 The male has blue oval spots on each abdominal segment and a long , thin pterostigma. I will have to have another try to find a female and a more "perfect" male
Posted by Tony Morris at 22:37

Super! I saw my first Odonate yesterday here in central France - a white-legged damselfly. That just shows you how cold it's been.

Hi Susan, We do get them on a few slow flowing rivers in Kent, but not very near here.
Tony