The sunshine today was very deceptive, as the cold wind reversed the trend towards summer temperatures. 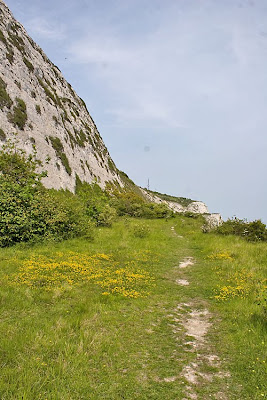 When conditions are like this the place to be is the bottom of the tramway below Langdon Cliffs. It is both sheltered and benefits from the heat radiating and reflecting from the car park and concrete buildings of the port. 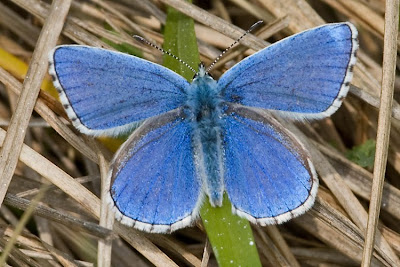 Adonis blue male (Polyommatus bellargus)
There were a good number of blue butterflies on the wing and I was pleased to find that many of them were Adonis Blues. The tell tale black lines, extending through the white border are diagnostic. I was interested to find that some of the images I found via google on the Internet were wrongly identified, a warning when gleaning information on a subject you don't know much about! 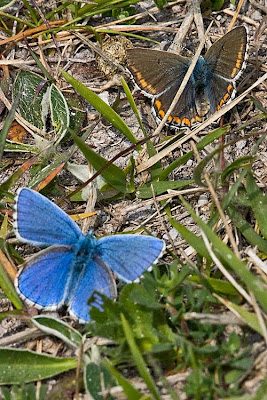 This particular male was pursuing a female, in amongst the grass stems. It seemed to keep trying to get underneath the female before mating. Even on the female the black lines, passing through the white border are evident. 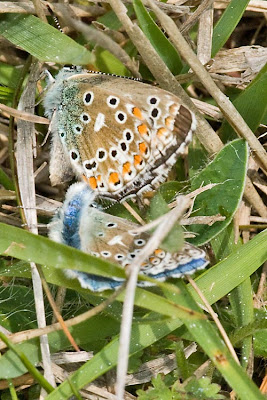 She on the other hand did nothing to help him. Quite the reverse, she seemed to go out of her way to thwart his advances. 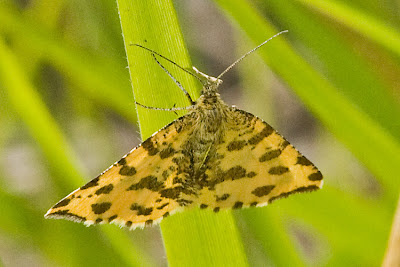 Speckled Yellow (Pseudopanthera macularia)
I was very pleased to see this little day flying moth, the Speckled Yellow. It is only the second time that I have seen one and the first time I've managed a reasonable photo. The caterpillars feed mainly on wood sage (Teucrium scorodonia), I'm not sure how close this grows to the tramway. I also saw a Mother SHipton, but she didn't hang around for a photo-shoot. 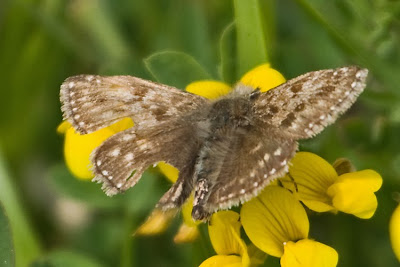 Dingy Skipper (Erynnis tages)
I finally found the butterfly that I'd been looking for, a Dingy Skipper. Unfortunately the first one I encountered was badly damaged, with big chunks out of one wing. 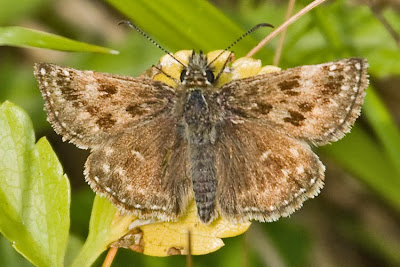 I don't know it it was because of the wind, or because they seem less active in the afternoon, but I only found three or four today. Luckily the two I took pictures of were in decent condition. I did find the damaged one again so it was obviously active and moving around. 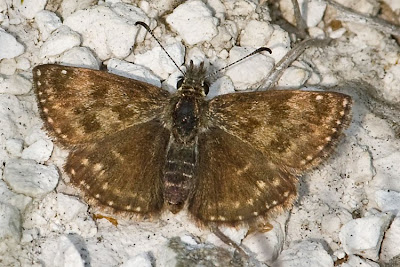 Just as I was leaving I saw this pristine specimen sunning itself on a piece of chalk. Other butterflies around were Orange Tip, Wall and Small White. Away for the most sheltered areas the wind was really not conducive to butterfly watching. 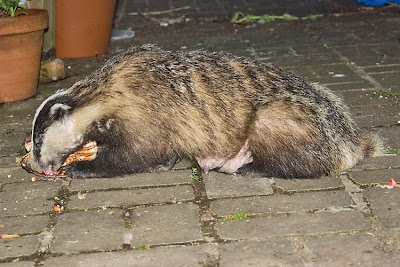 This little madam turned up this evening. There is no doubt that she is feeding young. Pam and I are both confident that we haven't seen her before, you can't really miss her feeding bottles can you! While she was stocking up Brush Tail arrived. She became very vocal, issuing a sort of growl I haven't heard before. He tried to muscle in, indulging in the normal bottom pushing duel, but despite his larger size she refused to give way. After a while he had another concerted shove and she gave way. By then there wasn't very much left and I think she was quite content to leave him to it.
Posted by Tony Morris at 23:39

I agree that there are a lot of mis-IDs out there on the internet, but also a lot of really solid useful sites for those groups that one doesn't have field guides for. Not being a mother myself I rely a lot on ukmoths.org.uk for example. Thank you for showing the little yellow moth - I've been seeing this a lot in my orchard, but haven't had time to ID it, so now you've saved me the effort :-)

Hi Susan, UK.moths is my most used site,and there are many great sites.I was just concerned that it is easy to fall into the trap of not being discerning enough. Speckled Yellow is a beautiful little moth isn't it?
Tony

Another great narrative & set of photos,Tony!