A Damsel in distress?

Today was the first day that there have been Damselflies round the ponds in the garden. I don't think that I checked yesterday, and the ones I watched today look as if they've been out for a little while. 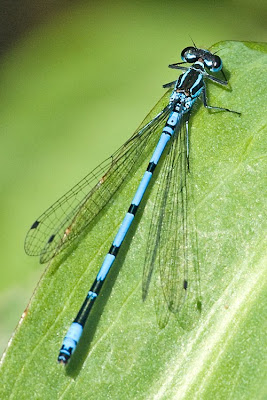 The Azure Blue Damselfly is the fist out here and there were several around at each of the ponds. The distinguishing character is the U mark on segment two. 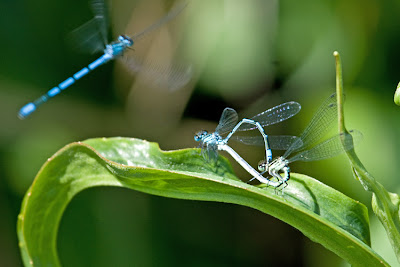 They haven't wasted a lot of time, and the males were already paying the females a lot of attention. In this case they're mating in the characteristic "mating wheel position", and a second male was in close attendance. 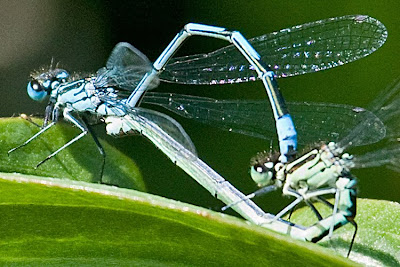 The mating system of dragonflies and Damselflies is unique among insects. The males primary genitalia are near the end of the abdomen, but he also has secondary genitalia under segment two of the abdomen. While the female is at rest he clasps her thorax with his legs and then bends his abdomen and transfers sperm from the primary to the secondary genitalia. When they mate, he uses the anal appendages to clasp the female round the thorax and she moves her abdomen to the right position to receive the sperm. This seems a very complex system compared to the wham bam thank you mam of many mammals! 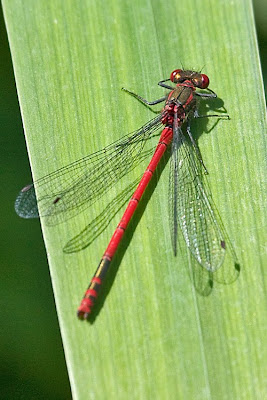 While I was photgraphing the Azure Damselflies I noticed a second species resting on a reed. 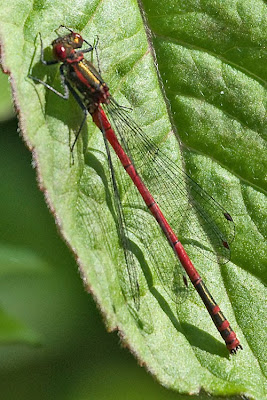 As far as I can remember it is the first time that I've recorded Large Red Damselflies in the garden. I will have to have a look round the vegetation tomorrow to see if I can find any excuvia (the case left when the adult Damselfly emerges from the final stage of the larva.
Posted by Tony Morris at 23:43