Some of the "big boys" were waiting in the moth trap this morning. It is always a bit of a thrill to find a Privet Hawk-moth when I empty the trap. 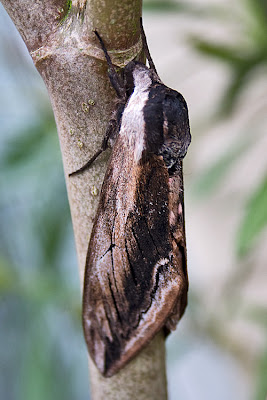 Privet Hawk-moth (Sphinx ligustri)
In most years they appear around this date, although twice, in eleven years I have had May records. They are normally quite happy to be gently handled and have "velcro" like feet, that cling tightly to your finger. With a wing span of up to 12 cm this is one of the largest moths to be found in the UK. 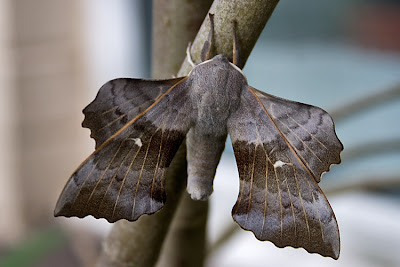 Poplar Hawk-moth (Laothoe populi)
The Poplar Hawk-moth is a bit smaller than the Privet Hawk-moth, but with a wing span of 9cm it is still a big moth. This one is the second of the year, the first was on June 2nd, a bit later than usual. 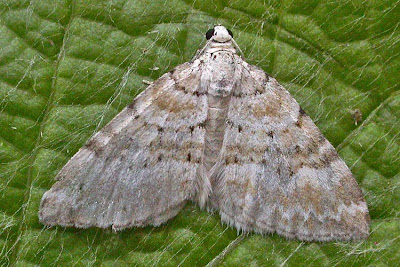 Grass Rivulet (Perizoma albulata)
I've only caught 10 of these tiny "macros"in the garden, always between the end of May and the middle of June. It is really a moth of open dry grasslands and shingle beaches, so I suppose the ones I catch have wandered a bit. It has a wing span of just over 2cm, and often flies in the late afternoon and evening. 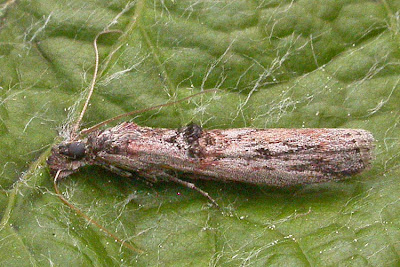 Nephopterix angustella
This micro goes by the name of Nephopterix angustella, and apart from the rather strange row of raised scale tufts about a third of the distance from the head it has few distinguishing features. It's caterpillar feeds on the berries of Spindle (Euonymus europaeus). I have only caught a few, but I suspect that it is not that uncommon in the right habitats in southern Britain. I has a wing spam of about 2 cm but when a rest, with it's wings tight to it's body it is really difficult to see when it lands.
Posted by Tony Morris at 23:14