Having made a mess of the photos I took of the Red-veined Darter a week or so ago, I thought that I go to the Restharrow Scrape and see if I could see one again. Instead a spent an hour or so watching a Pectoral Sandpiper. I know that one had been seen a the beginning of last week but I wasn't aware that it had returned. 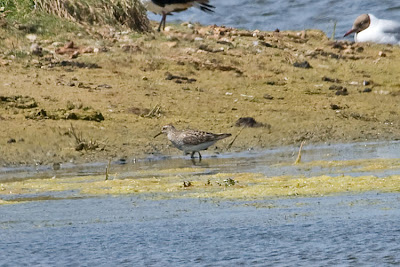 The hide already had a couple of regulars and I was quickly put on the bird. Unfortunately it was on the far island, but as usual I was told that it had been on the closer island earlier. I was feeding on the edge, giving it's normal pot-bellied impression.

Much closer to us an few juvenile Yellow Wagtails were dropping in for a wash and brush up. 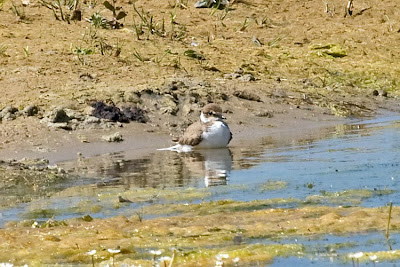 After last weeks adult Little Ringed Plover I was pleased to see this juvenile, hopefully the product of a local breeding pair. 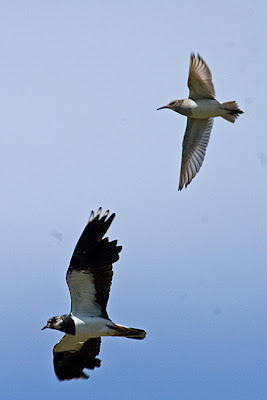 Something spooked the Lapwings on the far island and scanning through the flying birds the Pectoral Sandpiper was up with them. 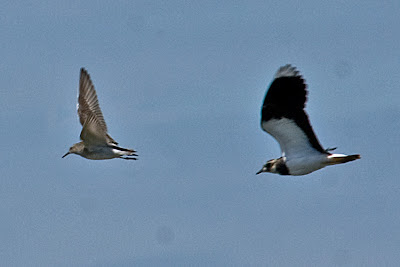 They flew towards our end of the crape and for a couple of seconds there was some hope that they might land immediately in front of us. 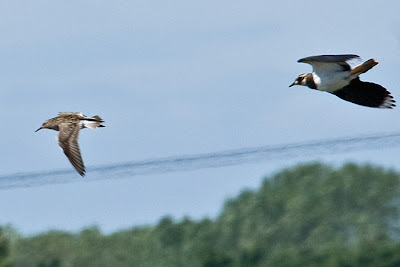 In flight it looked quite long winged and a very indistinct wing-bar, for less prominent that on a Dunlin, was apparent. 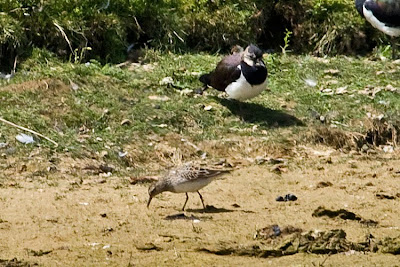 After a short fly round they returned to the same spot that they'd started from, son the views remained fairly distant. The sharply divided streaked breast and white underparts were obvious, but an opportunity for a closer portrait would have been useful. 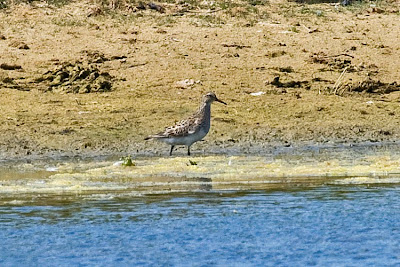 When alert it showed the long necked, small headed appearance that is characteristic of this species. A look along the path failed to find and darters, although Chris Bond did say that a Red-veined Darter had been seen earlier.
P.S. This is my 1200 post!
Posted by Tony Morris at 20:04