Hiding from the Wind

The wind really made flogging round Bockhill an uncomfortable experience today. It was OK in some sheltered areas but in any open site the 30 mph wind made it difficult to find anything. We did hear at least one Treecreeper in Farm Wood, 16 days after I seen two with Brendan and Steve. I suspect that they have stayed around undiscovered until today. In the Paddock there were still two Whinchats and a couple of Spotted Flycatchers but far fewer warblers were evident. 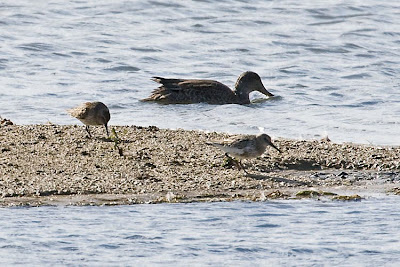 In the end I decided to do a bit of birding in the shelter of the Restharrow Scrape Hide. There wasn't a great deal to see this afternoon. A couple of Dunlins, refugees from the high tide were feeding on one small island, but the light was poor in that direction. 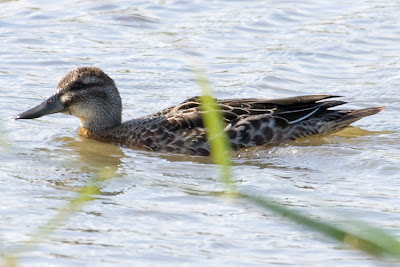 Right in front of the hide a young or female Garganey drifted by. They are not as conspicuous as the beautiful spring drakes but they do have a distinctive face pattern. 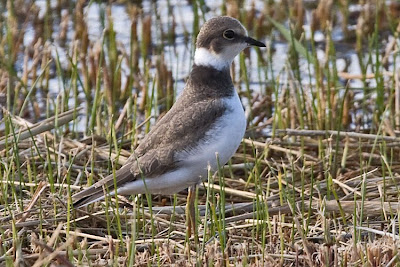 I was rewarded with a close visit from the juvenile Little Ringed Plover that been around for a while. 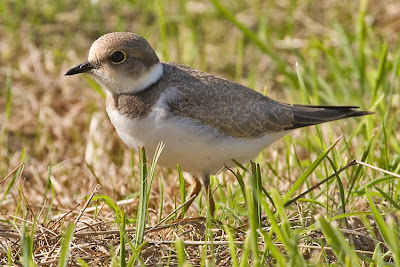 The yellow eye-ring is already quite noticeable but it is not as bright as the the adults'. The pale fringes on all the mantle feathers were apparent from close range. 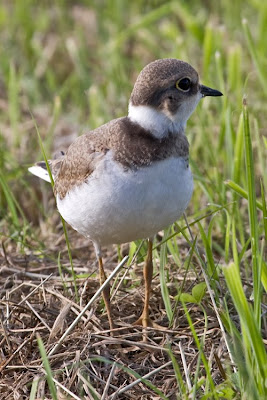 The success of Little Ringed Plovers as breeding birds in the UK is very much due to the building industry. In the 19th century it was a very rare bird with only eight recorded example and until they bred at Tring in 1938 there were only another seven records. Two pairs bred at Tring in 1944 and then the colonisation of Britain began, with the huge expansion of gravel pits and workings. By 1972 there were around 400 pairs and by 1984 the estimate was between 825 and 1070 pairs, with breeding confirmed in both Scotland and Ireland. It will be interesting to see what changes thee have been when the new atlas is published. It is one of the few species that has both directly benefited from man's activities and is not accused of being a public nuisance.
Posted by Tony Morris at 22:24

We were at Restharrow on Sunday and photographed what I expect were the very same Garganey and juv LRP :) Your pics of both are better than ours were though!

Thanks, your pictures look OK to me!