At 12.30 today I watched this group flying over Kingsdown Road. The Spitfire, known as the Silver Spitfire, returned to our shores, escorted by two Red Arrows over the Channel, and with a support plane. The aircraft landed back on British soil after its 27,000-mile, four month trip around the world, having flown over Capel le Fern and Dover on its way Goodwood. (Thanks to my friend Dell Harris for the information). 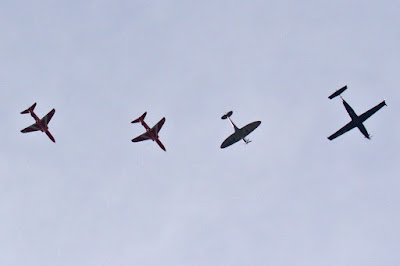 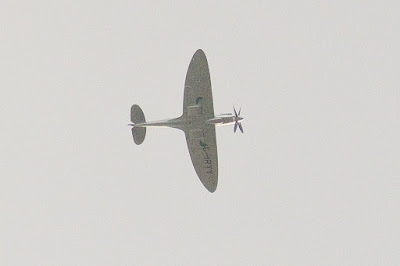 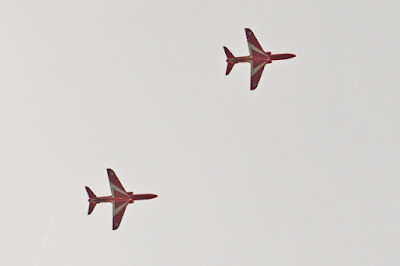 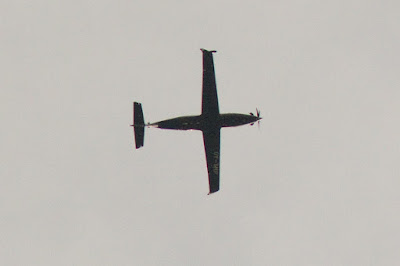 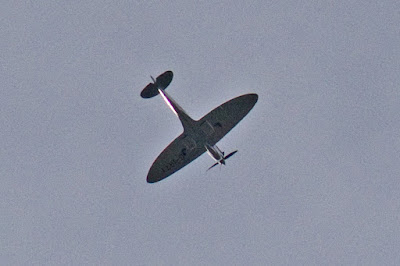 October 1943 MK IX LF Spitfire MJ271 was delivered from Castle Bromwich, Solihull, to RAF Lyneham, before being finished, tested and harnessed with guns and given to 118 Squadron at RAF Detling.

February 1944 With 118 Squadron, the Spitfire was immediately sent into action, sometimes completing several missions per day, including patrolling the Dutch coast and acting as cover to Fortresses attacking Berlin.

April 1944 Moving to be based at RAF Ford, the aircraft was frequently sent to divebomb targets and encountering greater degrees of flak (antiaircraft gunning) than before.

November 1944 Now housed with the 401 Squadron at the Dutch base of Volkel, the Spitfire saw out the war with several missions targeting railways, before sustaining damage in December 1944 and seeking repairs in the Belgian province of Wevelgem. It never returned to action.

The Silver Spitfire
The Silver Spitfire CREDIT: HEATHCLIFF O'MALLEY
August 1947 After the war, the Mark IX was delivered to the Dutch air force. Over the coming decade, it was struck off charge, used as a decoy at Volkel, and moved to the Delfzijl War Museum.

April 1973 After more than 25 years on the roof of Delfzijl War Museum, it was transferred to the Anthony Fokker Technical School, before being restored and moved to a museum in Schipol, near Amsterdam.

March 2003 The Spitfire made its final foreign move to Leylstad, before Historic Flying Ltd, based at Duxford, bought it and brought it home in 2006.

September 2016 Buying the aircraft at auction, Boultbee Flight Academy conjured a plan to have the plane restored to its former glory as the Silver Spitfire.

August 2019 The Mark IX, under the registration G-IRTY, is set to circumnavigate the globe.