I had intended to walk along the cliffs at Langdon in the hope of see some early signs of birds nesting or at least displaying, but the weather was terrible and in the end I sat and watched this Carrion Crow. 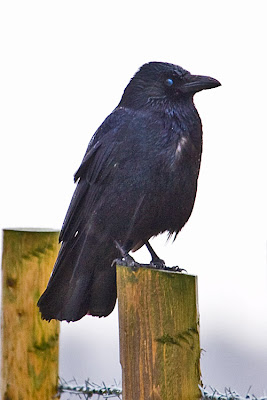 It almost appeared to be relishing the rain, and sat on this post and shuffled it's feathers periodically. 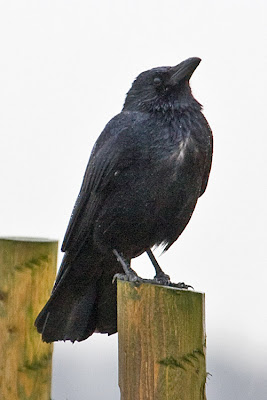 Every now and again it pointed it's beak to the sky as it it was enjoying the feeling of the rain running down it bill and down to it's gape, 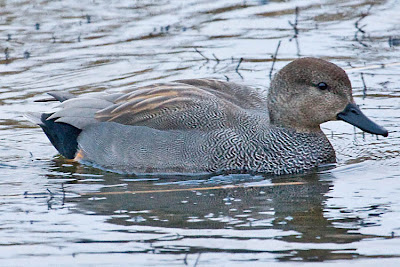 I had a look at the photo of the Gadwall, at Buff Ruff that I down loaded yesterday, and decided that it was horrible. As the male Gadwall is one of my favourite ducks, I love the subtle vermiculations on the breast and flanks, I thought I ought to put up a better picture. So here's one I took before, but only two days before at Grove Ferry.
It set my nest box recorder to video, instead of photo this morning and surprise, surprise I had four ten second snippets of a Blue Tit visiting the box. It's not great quality but I've put up one example, you can at least see it's a Blue Tit and hopefully if they nest, it will adequately show whats going on in the box. Click on it an have a look.
Posted by Tony Morris at 23:28

The Blue Tit looks well satisfied with the potential of this box!

Nice piece of video Tony, I hope it decides to move in soon. Agree with you on the merits of the male Gadwall, nicely subtle.