After watching and photoing "The Badger" around midnight I finally slipped into slumber after listening to the shipping forecast at 12.50 a.m. I was surprised to find myself awake and unable to return to sleep at about 4.30 a.m. In the end I had a cup of tea and drove of to Grove Ferry with the image of a Bittern walking around a few feet in front of the hide stimulating my imagination. And that's where it stayed, along with the Penduline Tit, which I didn't see either. 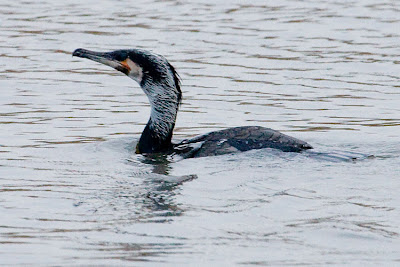 Although I missed out on the main attractions, I was interested in this Cormorant. I think it is the sub-species sinensis, known in the UK as Continental Cormorant. I also remember, in the distant past being told that very old "carbo" cormorants, the sub-species that normally breeds in the UK can develop a lot of white on the neck. 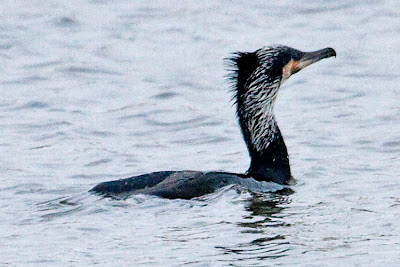 I think that this one is a continental visitor, but would welcome comments especially if I'm wrong. 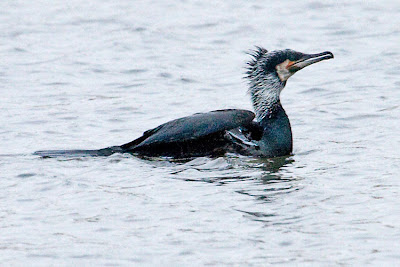 It certainly was a striking bird, but after only a couple of dives, and I didn't see it catch anything. it moved on. 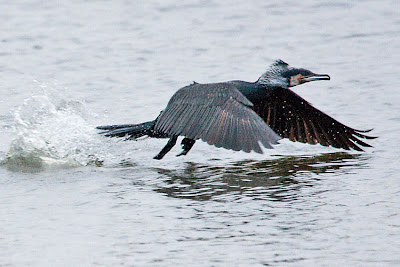 Like a lot of big water birds it took a while to get into the air. 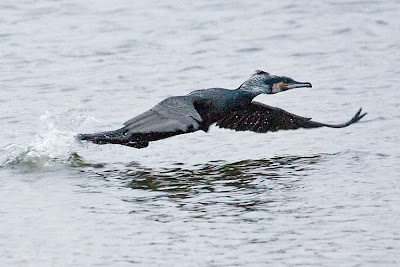 The pictures are rather grainy because this all happened at about 7.15 a.m. and on a cloudy morming it was still rather dark. 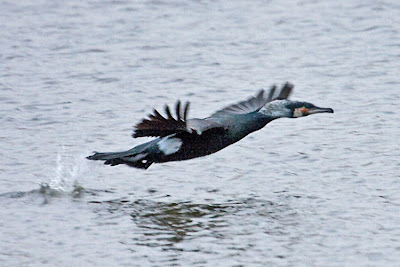 On this picture the large white thigh patch,that develops in the breeding season is clearly visible.
There's a good paper on "sinensis here
Posted by Tony Morris at 21:49

I'd be tempted to agree. I've been reading up on Cormorants in general lately to try and improve my general knowledge of birds one species at a time.

The most reliable method of separating the two is down to the angle of the gular pouch but this is often skewed by the position of the head and the angle from which it's viewed. Apparently records committees tend not to accept records of sinensis birds unless the gular angle is >90°.

You can read a bit about this at Ardea journal: http://nou.natuurinfo.nl/website/ardea/ardea_show_article.php?nr=236 (it asks for your email but you can always provide a false one)

The other differentiating features are that the sinensis birds are meant to be generally smaller but there is a degree of overlap as the cormorant is sexually dimorphic and the size difference is fairly useless in the field anyway if the bird is on its own. And sinensis birds are meant to have a greenish sheen while the carbo birds have a more blue/purple sheen. But some carbos have a green sheen on their chest so that's equally useless.

Overall, as the gular pouch appears to be ~90° I'd say your bird is a continental type. I could well be measuring it off the wrong parts though.

Finally, a very dodgy tip (I currently can't even locate where I read it), is that I read that the white patch behind the gular pouch has parallel edges in sinensis but not in carbo.

I've added this link to the posting:
http://www.paxton-pits.org.uk/id.htm