Last Thursday I unexpectedly found myself doing a talk on the Changing Bird life of Kent, when a friend was unable to it. It was interesting to put together a talk on the topic, even if I only had one day to do it! I realised that there are very few species that don't get a mention when it comes to talking about birds with a changed status. 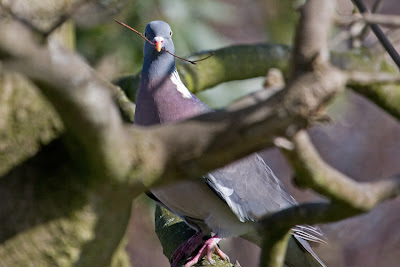 For instance, this week I've been watching this Wood Pigeon building a nest a couple of metres above the nest box in the tree outside my study window. It is disappearing into the thick ivy, each time carrying a small twig. Nowadays we are used to seeing Wood Pigeons in massive flocks every winter and seeing pairs in all suitable habitats in summer. At the moment they are nearly three times as numerous as they were 16 years ago, and I don't really know why. It may be that the population is cyclic and they are in the up part of the cycle, but they are certainly doing well nationally, spreading north and west and colonising some Scottish islands and western Ireland for the first time. The arrival of winter sown Oil Seed Rape may also be a factor. 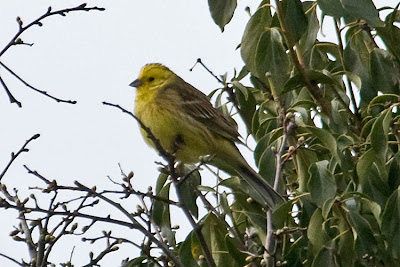 Unfortunately the attractive Yellowhammer is a bird in big trouble. It has declined by well over 50% in the last forty years and the decline seems to be continuing. There was some hope that set-aside might help the bird by providing feeding areas, but I fear changes in the way DEFRA funds set-aside will see a reduction in these areas. One of the main factors seems to be the huge reduction in stubble fields. Locally, the best place to see Yellowhammers is around the huge horse manure and straw pile on Collingwood Road. Today there were at least four around, including the male above. The area of hedges and horse paddocks around there is ideal for Yellowhammers and last year there were at least a couple of territories in the vicinity. 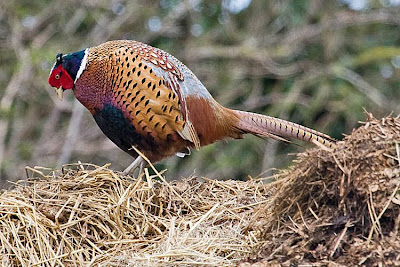 While I was watching the Yellowhammers this Pheasant came and stood on to of the pile and gave it's display, a loud call followed by a noisy flapping of wings. The Pheasant is certainly very numerous round here, but of course it isn't a native bird, although quite when it was introduced is not clear, some say that the Romans brought them, but what is certain is that they were common 400 years ago. In Chris Meads excellent "the state of the Nations' Birds" he says that 200,000 are shot each year out of a population of 20 million. I suppose that that means annually 19.8 million are winners!
Posted by Tony Morris at 22:33