The first Badger arrived this evening at the relatively civilised hour of 14 minutes past 10 pm.

It hoovered up some of the scattered peanuts and made its way to the "supper" platters. 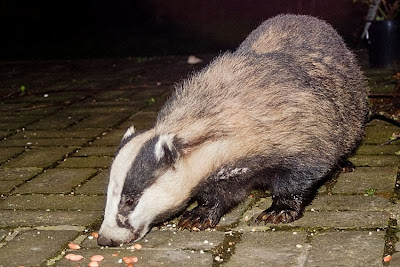 I was pleased to see that the cuts on "Scarface's" snout and forehead are now healing quite well. Hopefully they were more superficial that I at first thought. 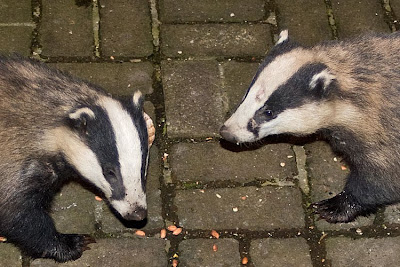 It wasn't long before the second regular turned up. Although they were inevitably very close to each other there was no visible interaction. I wonder if they travel together from the set or coincidentally turn up together. Often there is only one or the other so it was good to see both of them. 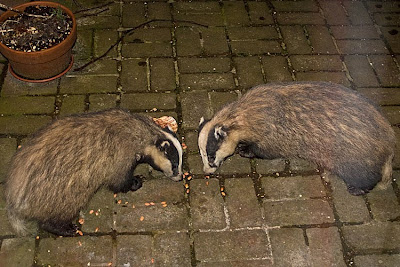 They quickly got on with the job in hand and had all of the peanuts eaten in about 10 minutes.

They seem very similar in size and I wonder if they are in fact siblings. I haven't been able to see any evidence of which sex either is. 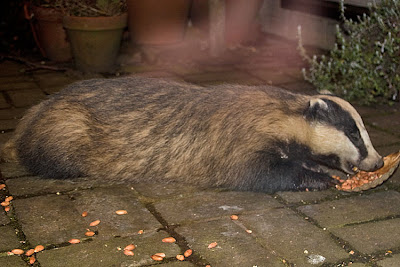 It seems that despite the fact that every now again they seem to see some movement in the house, "Scarface" obviously felt confident enough to lie down on the job. Once finished they were quickly off and trotted across the lawn to the back of the garden, where I presume they went through a hole at the bottom of the fence. (Tina - I hope you enjoyed the Badger videos).
Birds Nothing too exciting today, but I did see two Black Redstarts in the Paddock and had one White Wagtail fly low along the top of the cliff.
Moths After the relatively good previous night the windy cold weather meant that I only caught one Hebrew Character, a pretty poor return!
Posted by Tony Morris at 23:49

Nice hearing about the Badger with the scars, he seems more perky in the pictures.
Shame about the Moths though!