Nature in the Raw.

After doing a bit of a garage clean out this morning, I had a walk along the cliff top this afternoon. I still haven't seen a Wheatear this year and was hopeful that I might bump into one. In fact I didn't but instead I was treated to one of those wildlife experiences that both thrills and horrifies at the same time. As I walked down from the Monument towards Hope Point I was suddenly aware of two birds moving at high speed across the "big field". As I focused my binoculars on them I immediately saw a Peregrine moving into top gear. Expecting to see a Pigeon fleeing for it's life I scanned left and was surprised to see a Woodcock trying to out pace and out manoeuvre the feathered missile behind it. Woodcocks, like most waders, are quite strong fliers but there was no chance for this one. The Peregrine caught up with it's prey, just over the top of the cliff. It may have been my imagination, but I think that I heard the thump of the collision. A cloud of feathers drifted down and the Peregrine made off with the Woodcock in it's talons. It called briefly and on reaching the edge I saw it flying below the height of the top of the cliff in the direction of Hope Point. I lost it as it rounded a bend in the cliff face. I spent some time looking from all the accessible view points but failed to find it devouring it's meal. Exciting as it is to witness a Peregrine in all it powerful splendour I have to admit to a tinge of sadness that it was a Woodcock that met it's end. I don't feel the same when it's one of the local Pigeons, after all there are thousands of them, but this poor Woodcock had had a hard life. Forced to fly over the Channel by the hard weather it was probably getting to the time for the return journey, but instead it had the supporting role in one of nature's spectaculars. Oh and yes, I did have my camera with me, but I stood no chance of capturing this drama, too fast and too absorbing to try. 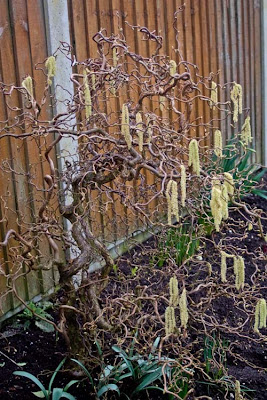 I had a look at this little tree in my neighbour's (Chris's) garden today, I hadn't noticed it before. Initially it was the catkins that drew my attention to it, but it is a very attractive tree. Chris calls it by it's common name "Harry Lauders Walking Stick". 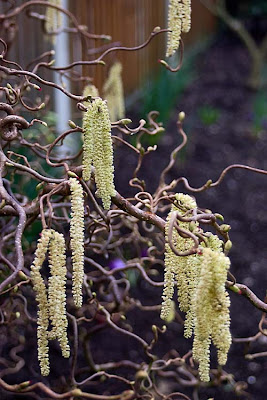 It's scientific name is Corylus avellena Contorta, and it is also called the Contorted Filbert. What makes this shrub so unusual is that the stems grow into contorted, twisted shapes. The branches, twigs and even the leaves are corkscrew twisted. Every Harry Lauder's Walking Stick was propagated from a single plant that was discovered in an English hedgerow in the 19th century. This one is only about three feet tall, but they will grow to seven feet or more. The early Spring catkins on the bare tree are very striking.
Posted by Tony Morris at 23:00