When the kids are old enough, kick them out.

The water levels at Bushy Ruff and Russell Gardens are still very high and in a couple of places the formal "Ponds" are over flowing. The waterfall at the end of Russell Gardens is fierce enough for a couple of Torrent Ducks, but I ad to make do with Mallards. 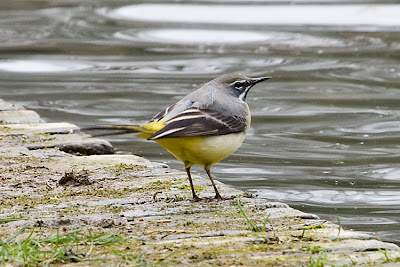 A Pair of Grey wagtails were wandering along the edge of the water, when the level is lower the are often found feeding on the muddy edges, but at the moment they're about two foot under. 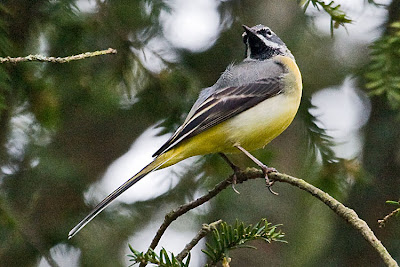 The male posed in a tree for a while, but I didn't hear his somewhat uninspired song today. 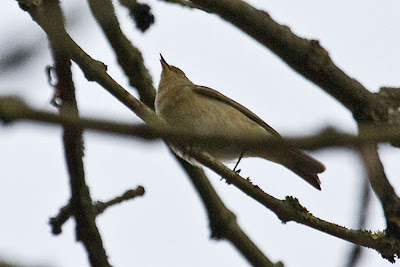 A song I did hear was one of the early signs of s spring, that of a Chiffchaff. It wasn't co-operative and stayed high in the tree, but if you look closely you can see the open beak and with a bit imagination you can hear the chiff-chaff-chiff-chaff song. 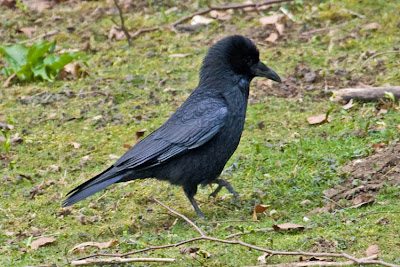 This young Rook, looking rather splendid was walking under the tree picking up leaves and throwing them to one side. I wondered if it was going through the motions of collecting nesting material, without actually being paired and having a nest yet. I assume that it is in it's first year, because of the lack of bare skin. They normally acquire this between December and April, so this one is a late developer. I was impressed by it's fluffy crown and glossy sheen, making what is often portrayed as I plain black bird far more interesting. 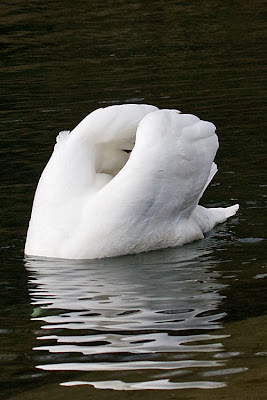 Five Mute Swans were on the main lake, two adults and three juveniles from last year. The adult above did have a head, but it was certainly hiding it well. 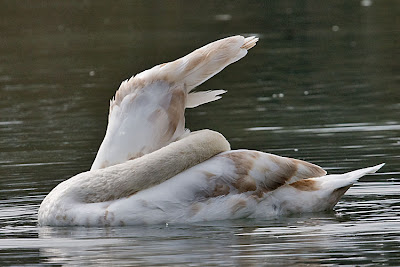 The juveniles now are almost white but still have patches of brown feathers. They seemed to spend a lot of time preening while I was watching, that is when they were allowed some peace and quiet to enjoy. 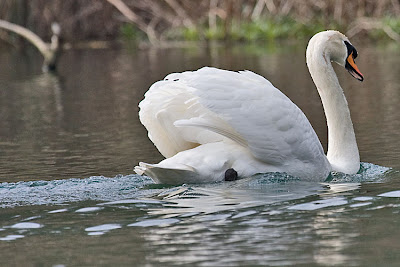 Every now and again one of the adult would put up it's wings in that regal way the do and set off after one of the youngsters. It didn't take junior long to realise that it was about to become a target of one of the parents and it too started to swim at full throttle, but without raising it's wings in the aggressive way it's pursuer was. 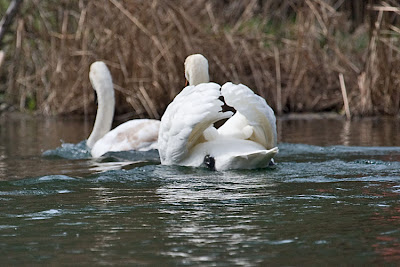 Once it gets to the breeding season adult Swans will not tolerate last years youngsters in their territories. The problem is that each territory is large enough to provide the necessary food for the resident pair and their new young, but not the previous years brood as well. That all seems very sensible until you think about the fact that as well as being solitary nesters over most of their range there are also some large swanneries where many pairs nest close together. At Abbotsbury there are up to 150 nests. Somehow the territorial instinct is overcome and the very large feeding area is shared, while the birds nest close to each other. A strange contrast to the normal behaviour.
Posted by Tony Morris at 23:02