Spurred on by the paper in British Birds I had a look at some of the local Herring Gull flocks. Armed with all that information I felt ready for a Caspian, or at least a Yellow-legged Gull. What did I see? Lots of Herring Gulls. 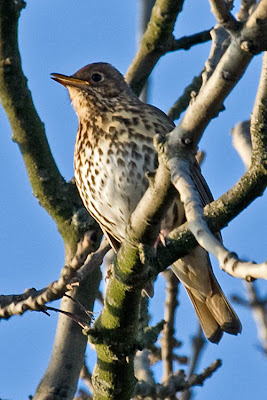 When I got home the local Song Thrush was giving it all, high in the Ash tree next to the house. It was partly obscured, but i reckoned it would be right outside the attic window. 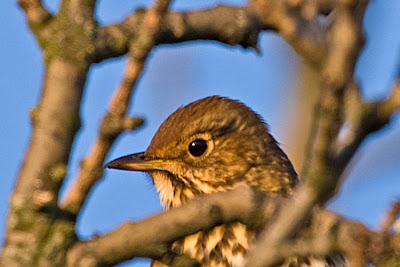 I was almost right, but I hadn't bargained for the fact that the change of angle meant that it was mostly hidden by branches. Nevertheless for that close the song was magnificent.
The first Badge appeared early this evening, well, before kick off time. It looked like the some one that had been coming regularly, but for some reason he was particularly jumpy and went when he saw movement inside the window. Although they often return quite quickly I didn't see this one again this evening, presumably it found some tit bits left elsewhere and forgot about the peanuts it had left behind. 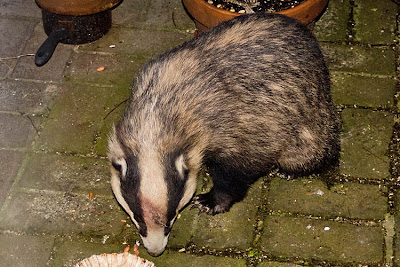 What I think was a different Badger came after the Champions League game (5-0 to the Gunners), and allowed close inspection. At first I though it had a dirty snout. 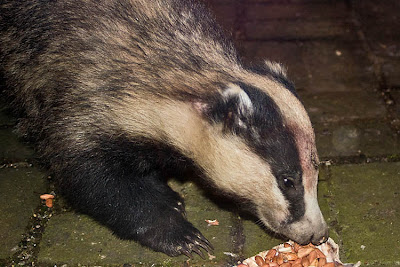 When I got closer it was apparent that it had quite a deep wound on it's head, between it's eyes. 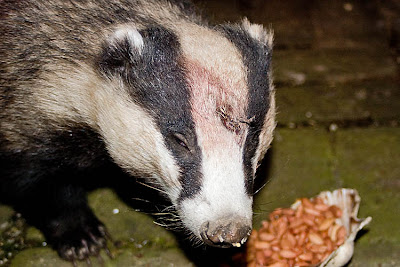 I know that they can fight, so I could be a domestic problem, but it didn't seem to stop it eating up the nuts. I wasn't so keen on some stale pastry that we put out. It tried a couple of bits and then left them. While I was watching this animal a rather beautiful Fox suddenly appeared on the patio. Sadly it didn't stay long. Whether it was because the Badger was there or because it could see me through the window I don't know, but it quickly retreated and disappeared, before I got a picture. Perhaps it will return later.
Posted by Tony Morris at 22:45