It is so cold and with a forecast of frost the Pond Skaters in the front garden pond could find themselves skating on thin ice tomorrow. To be honest my hands were so cold today when I was out that I wouldn't have been surprised if the rain had turned to snow! 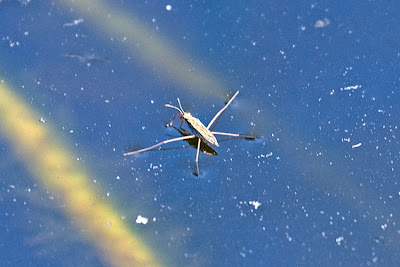 Pond Skater Gerris lacustris
Pond Skaters are one of the most widespread bugs in the country. They appear from late April until October and hibernate in the winter. They catch their prey of small insects by feeling the vibrations on the water surface through sensitive hairs on their legs. They hen dart across the pond and grab their meal. 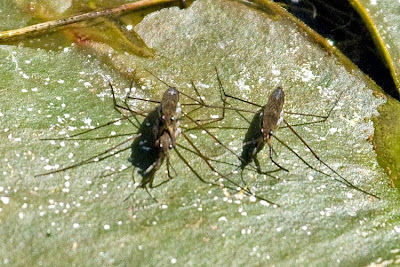 As can be seen above the male uses it's short front legs to clasp the female when mating. It uses it's middle pair of legs to propel itself forwards, and its rear pair of legs to steer left or right.
Posted by Tony Morris at 22:48