Like most mothers (that's people who catch and study moths not ladies that produce children) I have had a very poor year so far this year. Looking back I'm catching fewer moths 0f fewer species than in most years. The reason appears to be this cold northerly wind, that seems to have dominated our weather since march, with just a few days break when we thought that summer was arriving. 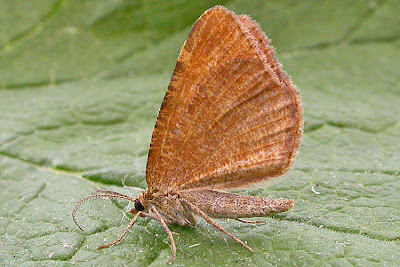 Rannoch Looper (Itame brunneata)
This week a few people have been reporting a rather interesting migrant, the Rannoch Looper. It is certainly a name that is full of intrigue. A migrant moth with a name which refers to an area of Scotland near to one of my favourite places, Pitlochry, in Perthshire. In fact it is restricted in Britain to the mature woodland areas of Central Scotland, but that's not where the migrants in South East England come from. The species is reasonable wide spread over Europe, and also occur in North America. Last night I had two of these continental visitors in my MV trap. Last year was the first year I'd caught this moth, if fact I hadn't really be aware of it before then. I caught two, one on June 9th and one on the 26th, so this years two are right in the middle of these dates. It is a day flying moth (well at least the males are) and it sits rather like a small butterfly, most of the time, when at rest. Both sexes are active after dark. 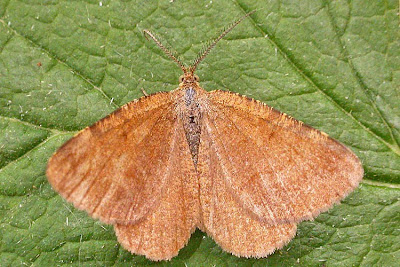 The males, and I think all the ones I've caught are males, are reasonable plain orange brown moths with feint cross-lines. In the female the four red-brown-cross lines are much darker. 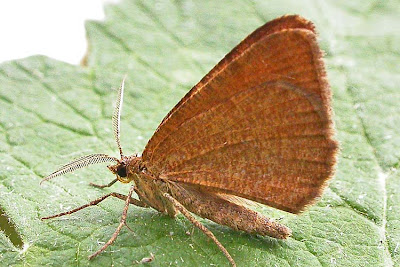 There wasn't much difference between the two I caught although the second one, above had lost a few cells, noticeable when the wings were open, and was it was less well marked on the leading edge of the forewing. 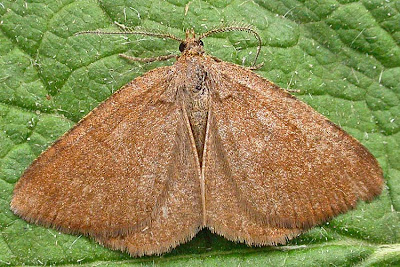 Once I got them to rest nicely, with their wings closed I then had to wait for them to relax and open the wings. The first one, top two pictures, never opened then properly and I had to be content with pictures of then about 3/4 open, but the second one was much more helpful, and suddenly lowered it wings and sat for some time with them flat.
Posted by Tony Morris at 18:28