As the summer really arrives it is some what sad to reflect that the days are already getting shorter. The activity along the cliff top this afternoon was mainly confined to insects, with most of the birds taking an afternoon break, I did notice a Meadow Pipit singing it's full song, but being too lazy to move from its perch, and there were several groups of Swifts heading south, presumably feeding groups. 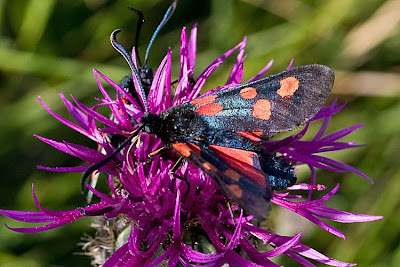 The strange Six-spot Burnet moth was adorning several flowers. I say strange because when it flies it really doesn't look like a moth, much more like a small beetle that's taken to the air. they have very reflective scales and I find it very difficult t0 get a good picture of them. Now that I've looked at this one I'm not convinced that it is in fact a Six-spot. Even allowing for the fact that the red at the base of the wing has a line through it, so it counts as two, I can still only see five spots. There are two species with Five-spots, the Five Spot Burnet (oddly enough) and the Narrow-bordered Five-spot Burnet. The former is mainly distributed in the west of England. while the latter is common throughout the country including Kent. 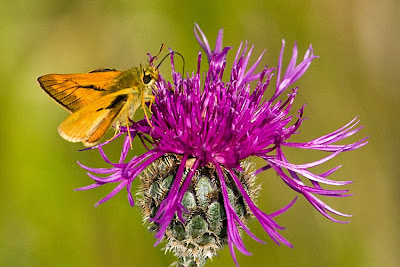 In the same area there were plenty of Large Skippers making use of the sunshine and the Knapweed. 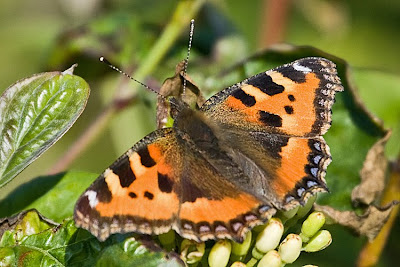 As had been observed on the Kent-birders group, Small Tortoiseshells are out and about. This looked such a pristine, fresh specimen that I couldn't resist yet another picture. Lets hope that this year sees them begin to return to their former numbers. 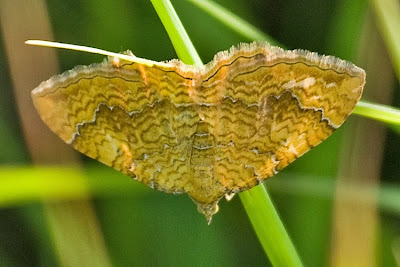 As I waked through the grass there were a large number of small yellow moths. These day flying moths look like small butterflies when they are on the wing, but unlike most butterflies they tend to perch in the shade rather than in the sun, and seldom give a good view. 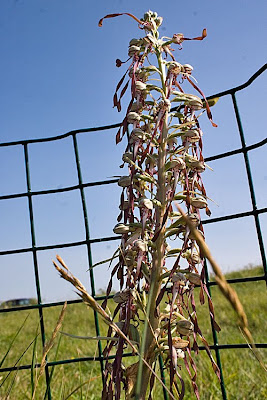 Although we are not able to compete with Sandwich Bay, when it comes to Lizard Orchids, I pleased to say that this year, out flower in the cage (to stop rabbits nibbling it) has got to a pretty good size, but so far no signs of it spreading, but this could happen. 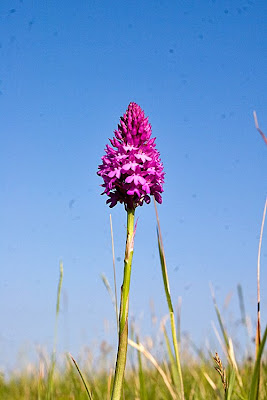 Pyramidal Orchids are fairly numerous along the top, but are not completely out yet. Compared to some I saw at Sandwich they are quite small, perhaps reflecting the exposed situation in which they are growing.
Posted by Tony Morris at 23:15

Your moth is yellow shell. Love the badgers on the patio! They are a rare beast up this way.
Cheers
Davo

I'm sorry to say that somehow I forgot to mention the name!