More garden watching today, but at least it was nice enough to have the doors open to the patio. 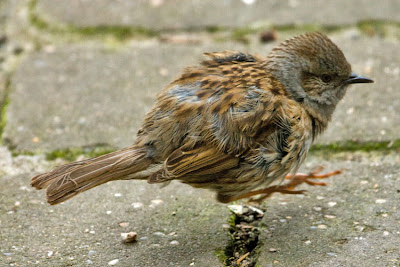 There's been a noisy family of Dunnocks in the hedge behind the pond, and now this brood has fledged the adults seem to be getting very agitated again. They normally have two broods and occasionally three, but very often more than one male is involved. Their love lives seem to be more complicated than a Chelsea footballers, with monogamy not an option. 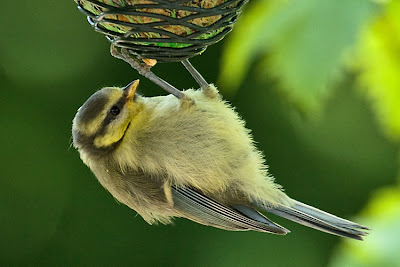 The family of Blue Tits is very much in evidence round the garden and this one was particularly partial to the fat-balls just outside. 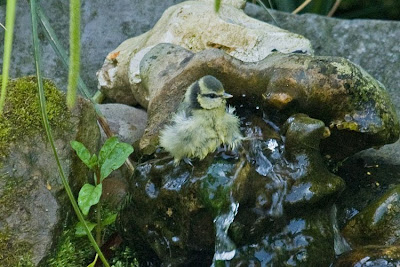 Most of the birds end up having a bath in the waterfall and Blue Tits are especially fond of a good splash. 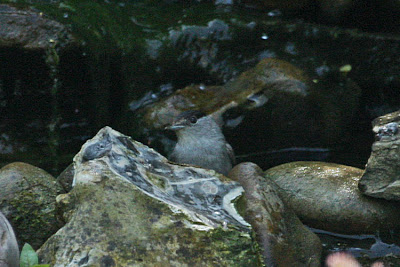 While I was watching the Blue-tit above I noticed a Blackcap suddenly pop up for the splash pool below. I didn't hang around long, preferring the seclusion of the hedge to finish off its preening and tidying up after the shower. 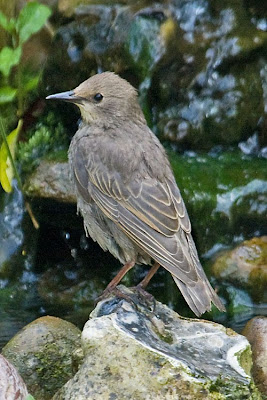 The young Starlings are now beginning to visit in groups, and although they are "vulgaris" I think that they are quite entertaining, especially the way that they follow the parents round begging for food. The main character of today didn't get his picture taken, but he did cause me some problems. There's a Greta Tit that has come to recognise what a moth trap is. Consequently I was up before light to cover my traps up and bring them in out of harms way (yesterday it found it's way into my Actinic trap! Even so it still knows when I go out to the conservatory it is a good time to be around. I have been putting the checked moths into some dense bushes of herbs out side the window so that they can disperse in their own time, but this Great Tit has cottoned on to this and dives in to find any juicy breakfast snacks it can find. I'm now putting the moths into a tub full of egg boxes and letting then go once it is dark. It is still inevitable that some still escape form the tub when the lid is opened to put more in and Parus major is there to take advantage. This morning it went to far and when I opened the window it came inside, but then could find it's way out. I had to catch it in the end, and gave it a good telling off before releasing it at the bottom of the garden where the rest of the family were feeding. It didn't take much notice and this evening it was flitting around outside the window while I got the traps ready to put out. Wrong time for moths but it was there all ready just in case!
Posted by Tony Morris at 23:18