Pecker In a trance

I couldn't resist talking a few pictures from the open window, while birds were coming to drink and eat jsut outside the window. A young Blackbird and a Chaffinch come to drink. 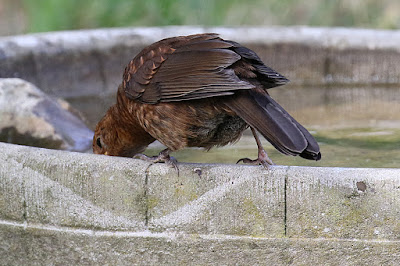 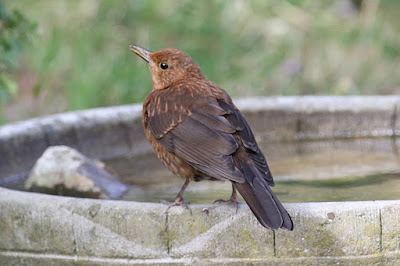 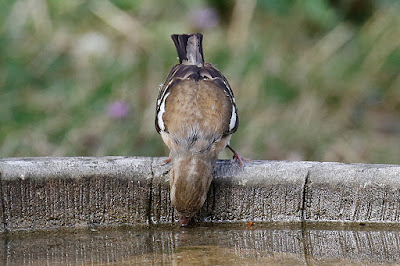 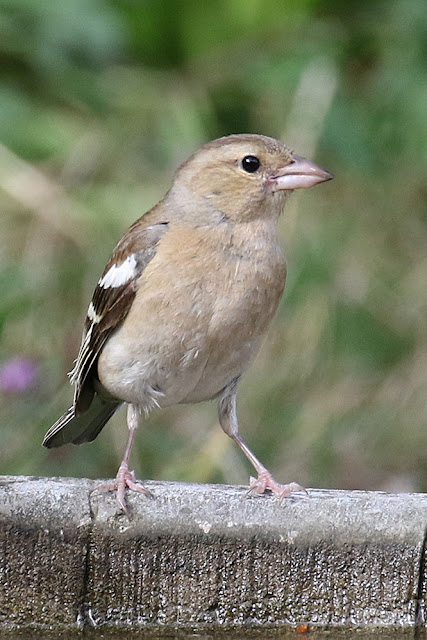 Even more fun is a young Great Spotted Woodpecker. It came down to eat and then, as often happens, it shuffled up the feeder and went into a trance for a frew munutes, before feeding some more, and then coming down to drink. I once walked slowly up to a feeder with a "tranced" Woodpecker on it, and just gently touched it's back before it woke up and flew off. 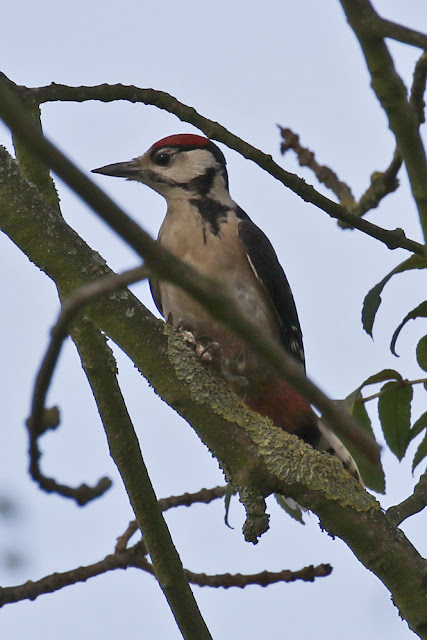 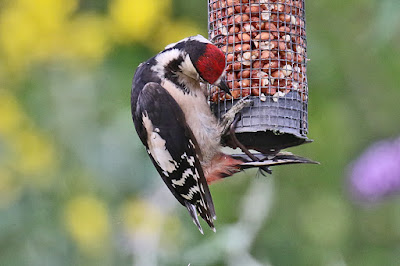 The solid red cap shows that it is a juvenile. 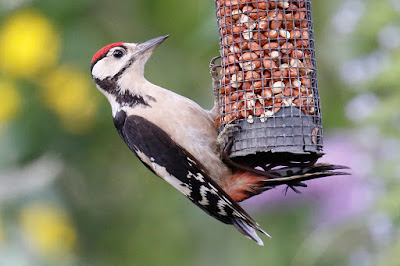 Having a rest, before moving up and going into a trance. 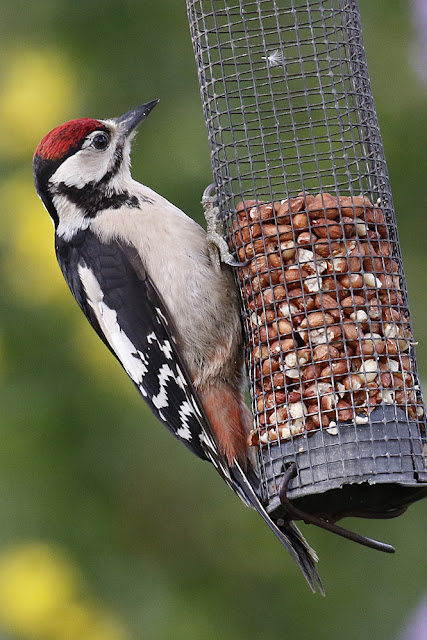 It sat in this pose for about five minutes before waking up and carrying on with the job. 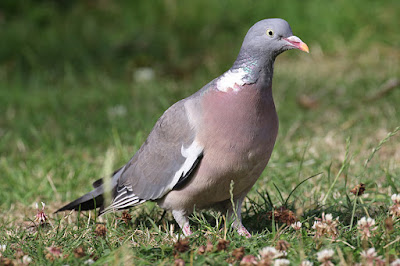 Woodpigeons are always on hand to hover up under the feeders. 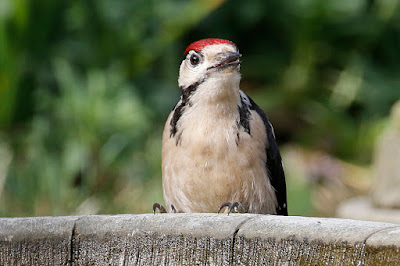 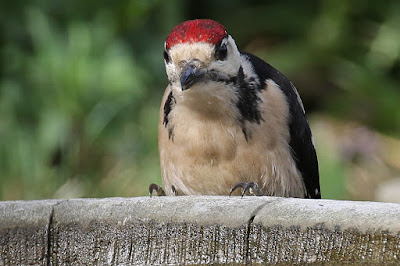 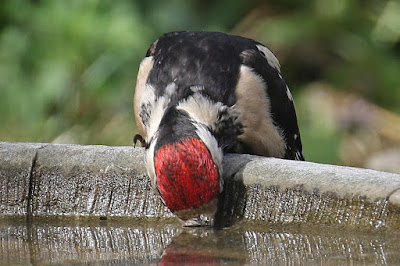 Apart from Pigeons birds can't such up water, so the get as much in their beaks as possible, before lifting up their heads to swallow. 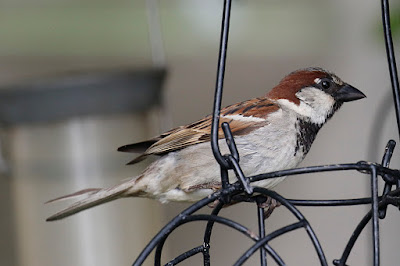 We lost most of our House Sparrows a few years ago, as did many areas. When we saw one or two back in the garden we set up a feeding station right nest to the house in a pyracanthus bush that the Sparrows had been using. At first they were quiteshy when we went out of the door.Now they just sit there. I did fill up their large fatball feeder a couple of days ago, but already it is well down. This is due to the fact that quite uninvited a female Blackbird now spends much of her time on the feeder. 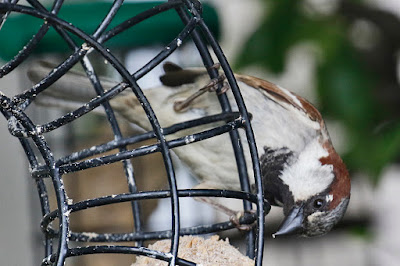 Despite being "just a Sparrow" I think the males are handsomwe chaps. He's moved down to get at the remaining fat balls. 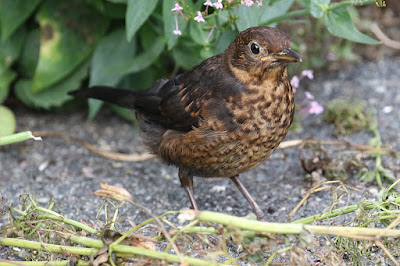 This young Blackbird, still showing the gape, is searching through some pruning litter that Pam is working on.They are very tame in the garden., 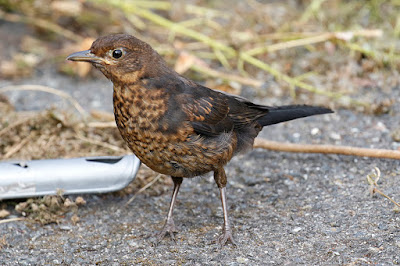 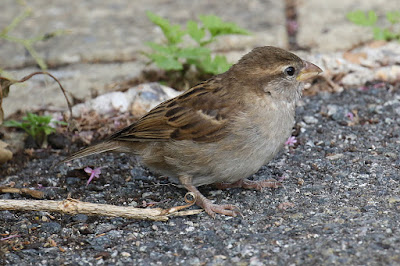 A female House Sparrow joins in the search for tit bits on the ground by the feeders. 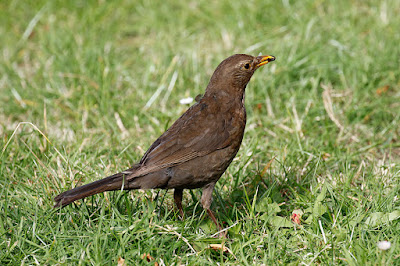 An adult females is still collecting food. I knowe they've had two broods, and despite the virtual plague of cats we have surronding the garden, most have fledged.

Glad to see that you've got some sparrows back, every garden should have sparrows. I estimate that a minimum of 20 young have been bred in the nests around my garden this year. Trouble is, with a permanent flock of 30-40 birds, they empty two tubular feeders of sunflower hearts almost every day.