Last year on September 29th I caught 160 moths of 43 species, this year it was four moths of four species. Two days before in 2006 I had caught my second Convululus Hawk Moth, a fantastic moth with a 4 inch wing span. This year I've had no sign of one of these vagrants from
the continent. 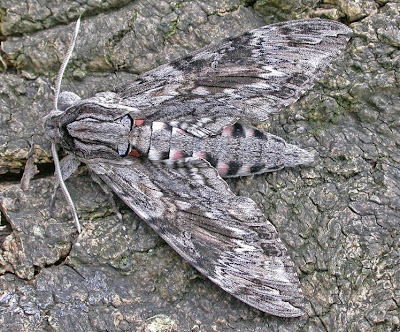 I was therefore somewhat jealous when Nigel Jarman sent me a text to say that there was one in his garden on Friday evening. 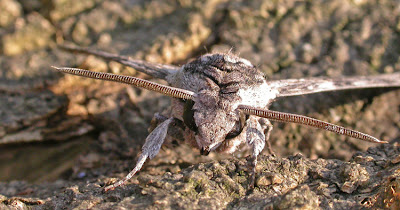 It was nectaring on the Nicotine plants in his garden. The two pictures above are of the one in my garden a year ago. I haven't given up hope and, against my better judgement, I have put out my moth traps tonight. I hope that there are more than four moths in them and they they are migrants of interest.
Birds and Other Wildlife Today Not unsurprisingly after a clear night the Paddyfield Warbler had moved on. The juvenile Red-backed Shrike was still to be found in the Paddock and there were a couple of Redstarts, a Pied Flycatcher and a few Ring Ousels about. The most obvious change was a very large influx of Chiffchaffs. There were everywhere and certainly numbered in the hundreds.
There were also a good number of Red Admirals around. I noticed four or five on Ivy flowers in Norman Road, one luckily avoiding the attentions of a Chiffchaff that fancied it for an early lunch.
Posted by Tony Morris at 21:22