Part of a flock of over 100 Goldfinches. 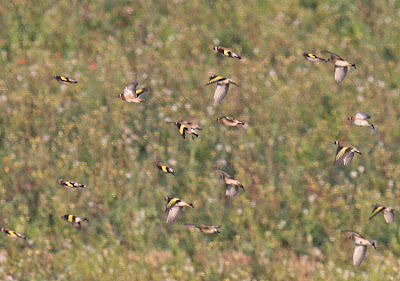 The winds had changed to day, with a gentle breeze from the NW and so had the birds. There were still Swallows around, but far fewer than yesterday and Chiffchaff numbers had dropped. The most noticeable change first thing was the large number of Goldfinches around. The largest field near the cliff edge was harvested a few weeks ago and left as stubble. Quick growing "weeds" have capitalised on the chance to grow and there are now many seed heads available for the finches. Many of our resident Goldfinches migrate south to Spain while others winter here, for some reason more females go south than males. Numbers here may be supplemented by birds from the continent. 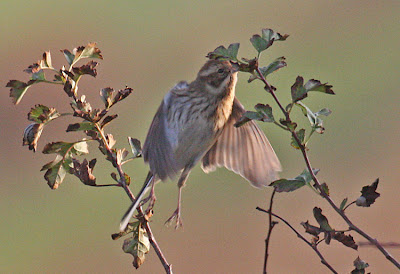 Another bird arriving, although in smaller numbers is the Reed Bunting, the one above, on a bush by the cliff edge had obviously just seen a tender morsel and had leapt at the chance to eat it. 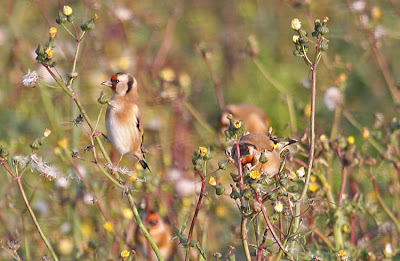 These Goldfinches didn't have to work very hard to find food in the weedy field. They have long conical bills adapted for extracting seeds. The males will often feed on Teasels, but these are more difficult for the females, which have shorter bills and therefore have difficulty reaching the seeds. 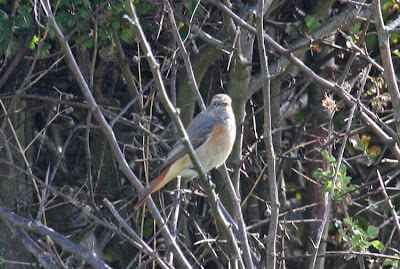 Along one hedge a Common Redstart was continuously flycatching, calling it "wheet" call incessantly. I Think that this is a male in its autumn plumage, but it might be a juvenile male. 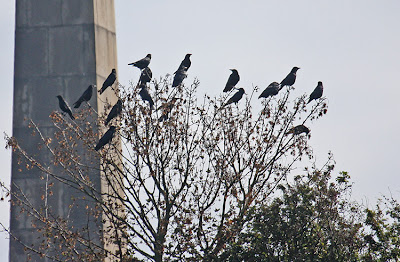 When I started birdwatching (it didn't become birding until a few years ago) I was told that Crows were either solitary or in pairs and Rooks formed flocks. Nowadays this no longer holds true. Carrion Crows have done so well in population terms that in winter they can form quite large flocks. 100 years ago the Carrion Crow was considered quite a scarce bird in east Kent, how things change! 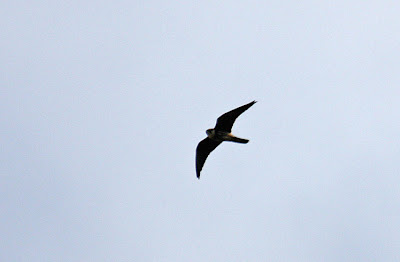 While I was taking a rest at the farm I was alerted to a Hobby circling over our heads. Although this isn't exceptionally late most of these migratory Falcons are already well on the way to Africa. There were still around four Ring Ouzels around, but there seemed to be fewer Redwings, but probably more Blackbirds and Robins, both of which do come in from continental Europe.
Posted by Tony Morris at 20:29