The National Nature Reserve at Stodmarsh has a small herd of Konik Ponies that are there to help manage the wetlands. They are part of a project between the Wildwood Foundation, Kent Wildlife trust and Natural England. 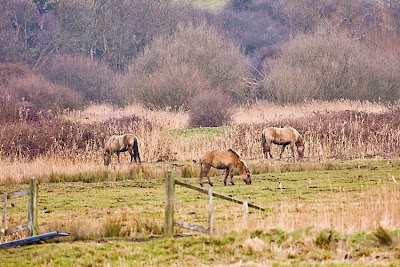 Koniks are direct descendants of the Tarpan, a wild horse which was hunted to extinction here but continued to inhabit Eastern Europe until the 19th Century. They have been used in projects to selectively breed horses showing the most Tarpan characters in an effort to recreate this primitive breed. 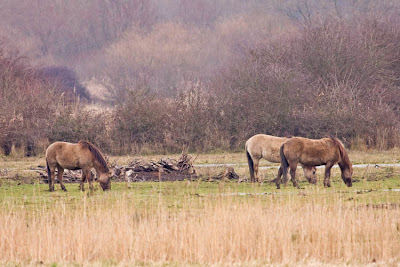 They are now being used in several reserves in the UK and South Foreland Valley, St Margaret's how has three which will help the Dexters in controlling growth on the recently cleared downland. They are beautiful small horses with large heads and a beautifully coloured coat. 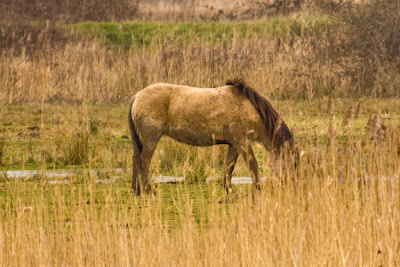 Suffolk Wildlife Trust are using them on one of their reserves, this is what they say about them "The modern konik is an excellent example of primitive vigour - it is long lived, very strong, and resistant to harshness of climate. It is also a prolific breeder which rarely aborts, it's great fertility being passed on to its progeny unimpaired. It never catches colds or coughs and if it receives a minor injury from another herd member the wounds heal without attention. It is used to foraging in the wild and can adapt its diet to live and thrive on very rough grazing and browsing when little food appears available." 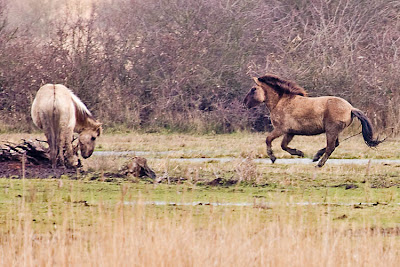 When I went to look at the Ponies in the Valley they were sheltering from the atrocious weather, or at least were not in a place to photograph, so I've only got pictures of their relatives so far. If they do their job properly we should be able to look forward to some go chalk grassland in the future. I know that some areas look very different with the scrub removed, but this is a habitat that occurs in many places and regenerates very quickly, whereas proper chalk grassland is a rare and diminishing eco-system that hosts many rare plants and butterflies.
Posted by Tony Morris at 22:37

The Koniks at my local reserve here in France (la Chérine, LPO) are utterly charming. I'm lucky enough to be able to survey in their field and I find them much more entertaining company than the Camargues on the other side of the reserve. Even the stallion graciously accepts my presence so long as I offer him due respect.