Grammar or Maths, or can we have both?

I heard Alex Bellos, author of "Adventures in Numberland", on the radio today. He was on Andrew Marr's "Start the Week" and giving his book a good plug. As someone who enjoys number puzzles and is appalled by the declining numeracy in the country, I was mostly in agreement with him. Then came the awful moment, when, while he was extolling the merits of the duodecimal system, he said "a lot more easier". It would be good to halt the decline in numeracy, but is doesn't have to be at the expense of literacy! 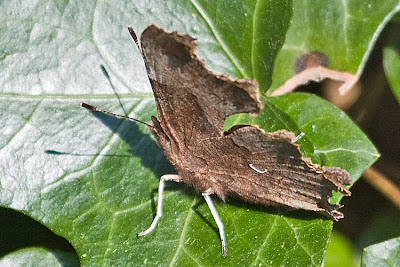 There have been a few butterflies around this week and I always enjoy seeing the first brood of the Comma. This is a real sun seeker, often resting on a sunny position on brambles and Ivy. They normally rest with their wings open but when the close them they reveal the grammatically correct comma. 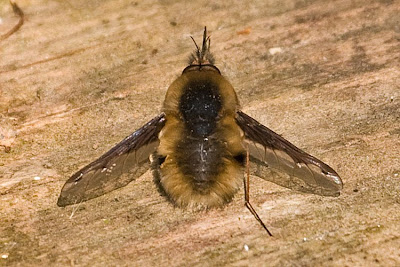 The Large or Dark Edged Bee-fly is a true fly although it is a bee mimic. It uses it's long proboscis to feed on nectar while hovering in front of flowers, especially primroses. it lays is eggs near the entrances to the underground nests of solitary bees and wasps. After the larvae hatch they find their way down into the nests where they feed on the grubs. 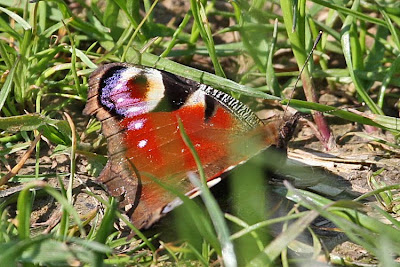 There seem to have been a larger number than usual of early Peacock Butterflies. As far as I know these aren't migrants but hibernate over winter. They are the probably the longest lived British butterfly with adults surviving from late July one year, sometimes to June the nest year. The Peacock is doing well, with most Butterfly transects showing an increasing population. The fact that they seem in such good numbers this year must mean that they survived the winter well despite it being one of the coldest for 20 years or more.
Posted by Tony Morris at 23:39

Saw a Bee Fly yesterday for the very first time and wondered what on earth it was - even thought of taking a pic and sending it to you, but it had gone by the time I'd found the camera!! Thank you for enlightening me!
Wendy

They are attractive insects, this is the most common. The Dotted Beefly has declined drastically and the Heath Beefly is restricted to the Isle of Man and a few Dorset Heaths.