It isn't only Badgers that pay us a visit after dark. Most of the animals caught on camera are cats, a strange thing that everyone who has a pet cat believes it is acceptable that it goes off hunting in someone else's garden! 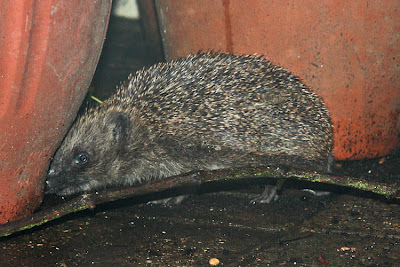 Last night saw the first Hedgehog visit that I've seen this year, hopefully it will stick around and get stuck into the slug population that has flourished in the wet weather.

The Hedgehog arrived at 10.04 pm and didn't stay very long. Despite the reputation that Badgers have as the only predator that will take a hedgehog we have never seen any interaction between then, even when, in previous years, they've turned up at the peanuts at the same time.
Normally the Hedgehogs have kept there heads down and then sneaked off while the Badgers are feeding.
This Fox appeared at 4.15 am, and was the second one last night. The first bit of video was too dark because the Fox nipped in from the side and was in and out before it tripped the light.
Posted by Tony Morris at 23:23

What great video Tony. Who couldn't find something to love about a Hedgehog! Armadillos have the same effect on me.