Blackcaps are one of the real joys of a Spring dawn chorus, and as a bonus they keep going through most of the day. 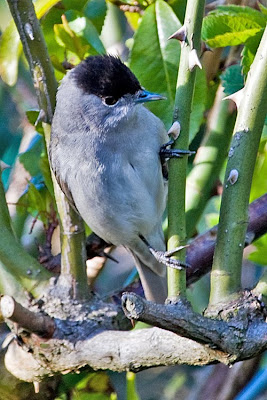 This one has been singing around the garden and neighbouring gardens for a day or so and late this afternoon was just outside my study. 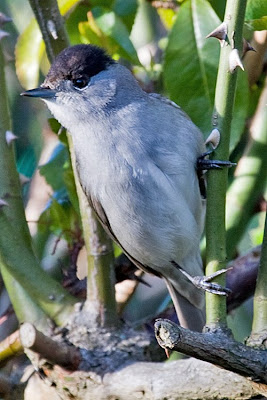 This is a large bold Warbler and it has become very much more common during the last 40 years. When I started to become aware of such goodies as Blackcaps they were a bird that I heard but seldom saw. This was obviously due to several things. I have got better at finding them, my optics are better may well be two of them, but I think they have had a major change in their character. 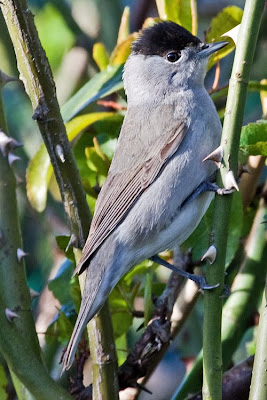 They do not migrate as far as some of our summer visitors, the British population mainly wintering around the Mediterranean, with some going down to topical Africa. I think that as the breeding population has increased the Blackcap has ceased to be as skulking as it used to be and now often sing right out in the open. The estimated population in the UK in 2000 was just over 900,000 pairs. 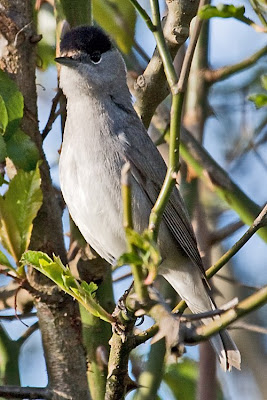 I made a "tacking" noise as this one was moving in the rose bushes and it adopted it's alert pose, with the cap feathers slightly raised, as it tried to see what was making it's alarm call. It has a very unimaginative scientific name. The genus of warblers it belongs to is Sylvia, from the Latin silva, a wood and it's specific name is atricapilla, from the latin, ater = black and capillus = capped. Of course the female doesn't have a black cap, but a rich reddish-brown one instead. 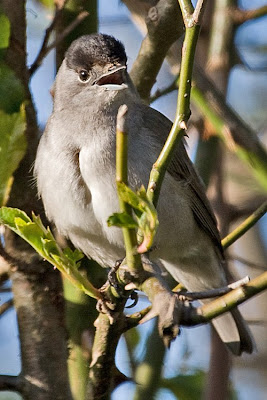 From head on, while it was singing, what must be in the top five or six songs of British birds, the quite wide bill is evident. It feeds mainly on insects in the summer but is omnivorous outside the breeding season, often eating various berries and fruits.
Posted by Tony Morris at 22:27