A walk round Bockhill Farm today was rewarded with some excellent views of one of the Little Owls, with the added bonus of being out of the wind, away from the exposed cliff top. 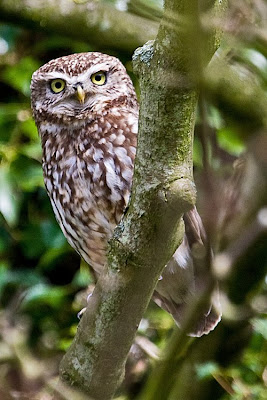 The Little Owl isn't a truly native species, with various introductions in the second half of the 19th century finally succeeding around Edenbridge and then in Norfolk and Sussex before spreading north and west. Previously there had been about twenty records that may have referred to genuinely wild vagrants. 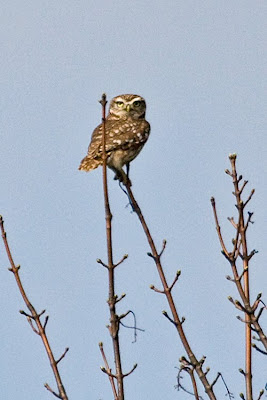 When I came across one today, it flew from the trees behind the barns to the little "Farm Wood". Here it set off a tremendous commotion, as all the small birds in the wood began to mob it. It moved once and sat out for a few seconds on top of a tree. With half closed eyes you can almost imagine a Hawk Owl sat up there! 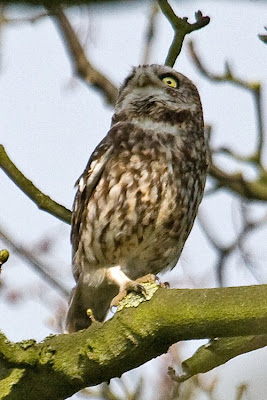 Enough of day dreaming. I flew back to them trees by the wood and onto one of the trees it seems to favour. It still wasn't free from the attentions of other birds. It seems to have a wary eye on one of it's assailants as it tries to settle down. 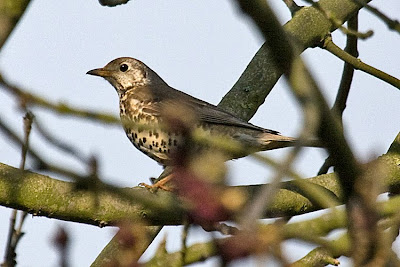 Probably the most vocal of the mobbers were a pair of Mistle Thrushes, which are probably breeding near by. In truth the thrush is as large as the owl, but it isn't equipped with those deadly claws or sharp beak. In fact the main food of the Little Owl is earthworms, insects and small rodents, but they will take young birds in the breeding season 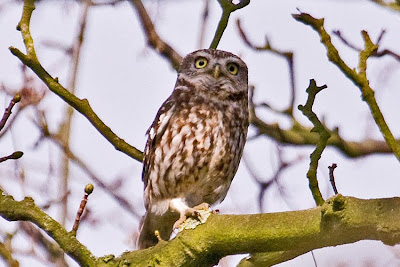 Soon it paid more attention to the camera pointed at it. It wasn't long before it moved to some denser cover and I continued my walk. I suppose I'm a bit equivocal about this bird. In general I'm not in favour of the introduction of non native species, but given the proximity of it's natural range in Europe and the fact that fossil evidence indicates that it was native in Britain in the Pleistocene era before the becoming extinct in England during the glaciation it is perhaps a re-introduction rather than an introduction. In the Owls of Europe, Heimo Mikkola says it is common in southern Europe, except on high mountains. However, outside Europe I know, I once watched one at the ski resort of Oukaimeden in Morocco catching insects on a field of snow, at about 2.600 metres.
Posted by Tony Morris at 23:03

Tony - Can you explain the reasoning behind the 19th Little Owl introduction? I'm so used to hearing about owls and raptors being wiped out, it's interesting to hear about a deliberate introduction at that time. Thanks!

Tina, I can't really. Many things were done then that wouldn't be done now, Skylarks on Vancouver Island for instance. Presumably because they are so endearing various people wanted to add them to our avifauna. Fortunately the Little Owl really doesn't seem to have a major affect on the balance in the ecosystem, unlike that destructive little beast the Grey Squirrel which really does have an affect on the population of our woodland birds.

A useful source of information on this and other introductions to the UK is "The Naturalised Animals of the British Isles" by Christopher Lever. I have a 1977 editin which contains my Lower School Biology Prize certificate [I bought the book with the book token I won]

The first UK introductions were in 1842 by an eccentric Yorkshire squire Charles Waterton of Walton Hall.

These were followed up in the 1870s by Leiutenant Colonel EGB Meade-Waldo, who explicitly stated that his purpose was "to rid belfries of sparrows and bats, and fields of mice".

I can think of one instance in the UK where Little Owls have had a negative effect and that is on Skomer where they made heavy inroads into nesting Storm Petrels until being relocated on the mainland.

As an aside I have seen very few this Spring compared to previous years I wonder if the hard winter has knocked them back, at least in North Norfolk where I live?

Thanks for that Steve, I'd forgotten the Skomer problem. Well done with the book prize, I always knew you had a hidden intellectual side.
Tony

Intellectual, probably not, in fact I remember the kid who came top in the biology exam being a bit put out that I had been given the prize instead of him. I think the teacher wanted to reward and encourage my obsessive interest in wildlife which was very good of her.

The RSPB owes her a debt of gratitude.