Something's Creeping through the reeds!

I didn't have many moth to go through this morning, cold nights and near gale force winds are a bad mix for mothing. When I'd finished I popped down to the Bay in the hope that the sea would be productive. I'm the first to admit that when sea watching alone I quickly get bored it there are only Gannets and a few Terns to watch. So with no Skuas or Shearwaters in the first 20 minutes my concentration drifted. Now that the weekend was over I decided that the Feast Hide at Grove Ferry might not be too crowded and with a bit of luck the Spotted Crake might still be around. 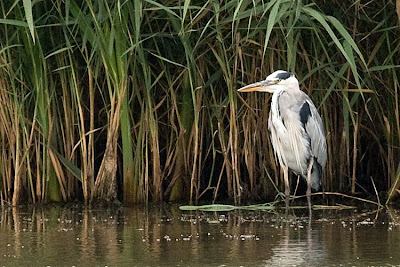 I was certainly right in one way, there was no one else in the hide when I got there and I don't really blame anyone giving it a miss in the awful weather we were having. The rain was blowing it but by sitting to me side of the open window I was able to watch the left hand side of the pool without the rain reaching me. AT the back of the pool a Grey Heron stood still with a rather menacing presence. I've seen then catch and eat various items of prey, so I hoped that the Spotted Crake hadn't passed too close! 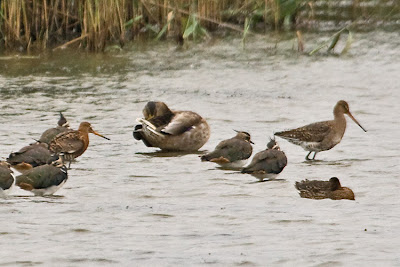 A brief flurry among the Roosting Lapwings ensued when two Black-tailed Godwits arrived. I watched them for a few minutes as the started to feed in the shallow water, but then went back to searching through the reeds for movement. Next time I checked the Godwits had gone and I hadn't seen them go. 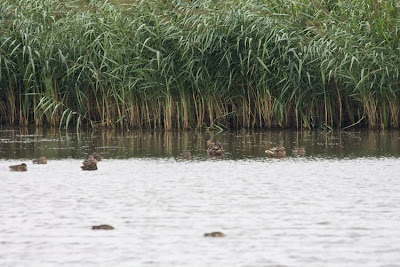 At the back of the pool I saw some movement as a Water Rail moved along. This happened a couple of times and then there was a different movement and it looked as if the bird had a shorter bill. It is a long way to the back of the pool and the birds never came right out into the open. There are two birds in the reeds above, in the middle, just above the water level. 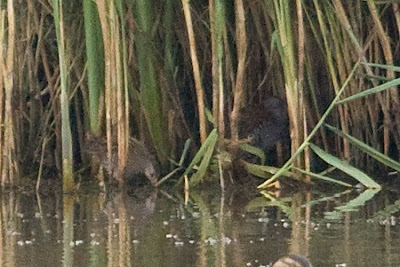 With a digital image it is possible to "blow it up" enough to just about make out these two related species. The Water Rail on the right is almost facing away but the Spotted Crake on the left is just about identifiable from the smudgy blob almost out of the reeds. That was as good as it got I'm afraid. I was joined by three other people. Two photographers, who I think managed to see the bird, it was difficult to explain exactly where I was looking, and another birder who entered silently and left without speaking. 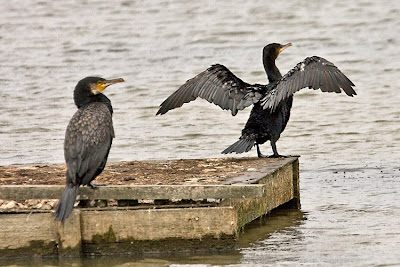