Another very quiet morning at Bockhill. There was a Spotted Flycatcher in the Freedown and the "big field" did hold three Wheatears and a Whinchat, but although I scanned every clod I couldn't find the Dotterel that had been in my minds eye when I started out! It must be because I read about the Dotterel on Pendle Hill on Mike Watson's blog last night. I did bump into Gerald Bovis and his wife, it was good to meet someone who was just a name on a couple of comments on the blog until then. 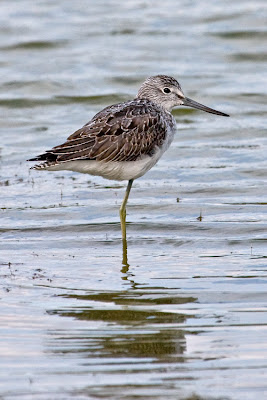 High tide at Pegwell was around 5 p.m. tonight, and for some reason I though that a visit to Backsands Scrape might be worth while. Today was one of those days when the journey wasn't really worth it. The usual group of Redshanks (20+), Greenshanks (8) and one Spotted Redshank were in the far corner and a Snipe was probing on the edge opposite. One Greenshank dropped in briefly, right in front of the hide, but soon decided to join the others. 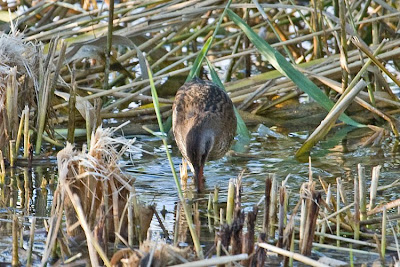 On the way back I popped into the Restharrow Scrape hide in the hope that there might be some activity there. A couple of Little Ringed Plovers were running round on one of the small islands and a Common Sandpiper bobbed up and down on the island in front of the hide. One Green Sandpiper made a noisy entrance and continued to announce it's island hopping movements with it's musical calls. Suddenly I was aware of movement at the edge of the reeds and a Water Rail came into view. 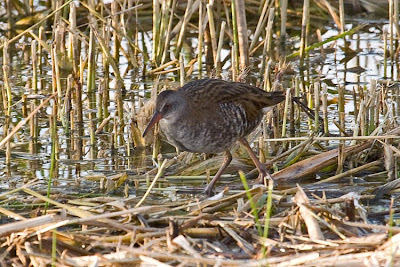 The evening light was now putting a warn glow on everything. The Water Rail was pretty much perpetual motion and slipped along between the reeds. 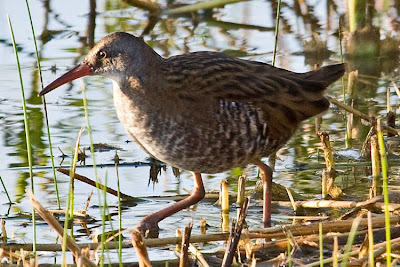 A one point it crossed a small open space but it quickly accelerated across it. The sun caught the front of the bird and reflected in it's eye. 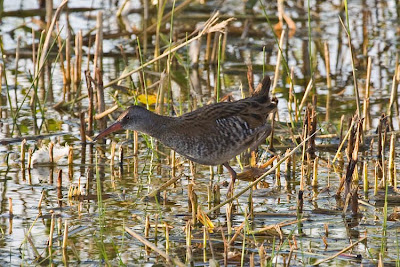 When it got in front of the hide it sprinted along to the thicker reeds, to the left, which by now was directly into the setting sun. One Garganey was feeding with a small group of Teal along the right hand side of the pool. A pleasant end to the day.
Posted by Tony Morris at 23:11